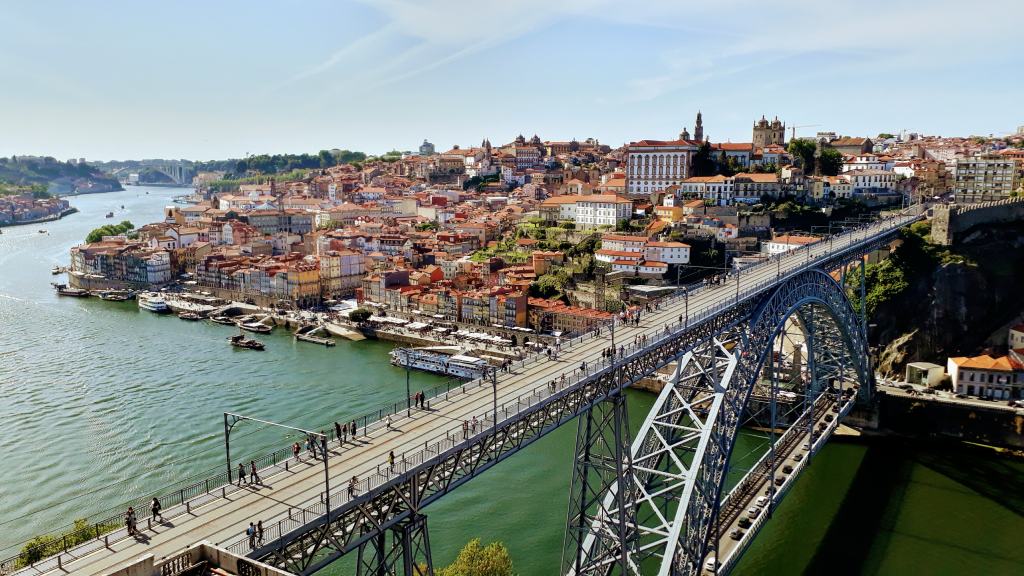 In order to do justice to this city, we would probably have to write a whole book. Having been in the shadow of its “big sister” Lisbon for a long time, it is no longer unknown now, but one of the most popular tourist destinations in Western Europe. And deservedly so: UNESCO Old Town, double-deck bridge Ponte Luís I, river Douro and delicious vegan food make hearts beat faster. Whether as a city trip or a starting point to travel the north of Portugal – Porto is always worth it.

Our video of Porto

But not only this: Porto is one of the oldest cities in Europe, the second-largest city in Portugal after Lisbon, European Capital of Culture of 2001, has one of the largest public universities in the country and is considered the “capital of the north”. It is therefore no wonder that Porto has convinced us completely.

The origins of the town go back to the Castro culture, which settled from the 1st millennium BC until the 1st century BC in the northwest of the Iberian Peninsula. Then came the Greeks, who called the trading place Kalos (Greek “beautiful”). The Romans took the name as Portus Cale for a Celtic settlement just before the mouth of the Douro into the Atlantic. The city was dominated by the Moors from 716 to 868 and from 997 to 1050, before it finally fell under Christian rule during the so-called Reconquista in 1092.

Today, Porto is the most important industrial and commercial city of the country and a major transport center. The university, art academy, museums, theaters and the opera lift Porto’s position as an important cultural and scientific center of Portugal. The historic center of Porto on the north bank of the Douro, has been on the list of UNESCO World Cultural Heritage since 1996. The port and industrial town of Matosinhos does not really belong to the city of Porto, but is treated as a quasi-urban district. For example, it can be reached by bus or by metro from Porto. It is located between the airport of Porto and the city itself. It is well-known and popular for its beaches. The sculpture She Changes, also known locally as Anémona (Portuguese “sea anemone”), by the American artist Janet Echelman, has been shown here since 2005.

The installation is Echelman’s first permanent public art installation and consists of three steel poles, cables, a 20-ton steel ring, and a net structure of varying densities and colors. Our interpretation of the artwork: Due to the changing, increasingly ethically motivated eating habits, the fishing nets are no longer used for fishing and henceforth serve as a memorial. 😉

Only one block from the beach away is the completely vegetarian bistro and shop called Raw – Comida & Granel. Here is almost everything unpacked, organic and for self-weighing. Besides food, there are vegan and eco-friendly cosmetic products and detergents to buy. Smoothies, soups, burgers and much more can be consumed directly on the spot or taken away, almost everything is vegan and a lot is gluten-free as well. In addition, cooking classes, yoga and shiatsu are offered. The focus is on a healthy and conscious lifestyle.

Only some beaches further south is the vegan-friendly Creperia La Bombarde. When we were there, there was a sweet crêpe and a savory galette (gluten-free buckwheat pancake) in vegan form. These are, just like all the vegetarian options, marked in the menu. However, the crepery also deals with special wishes and personal creations. We enjoyed it very much and we hope that they will expand their vegan offer in the future.

Only about one kilometer further to the south is the 16th century fortress Forte de São João Baptista da Foz. As the name implies, it is located in Porto’s historical district of Foz Velha, Foz do Douro or simply Foz, which has been declared a Historic Monument since 2002. The Rio Douro, with nearly 900 kilometers the third-longest river of the Iberian Peninsula, flows here into the Atlantic.

Besides the two land bridges with the lighthouses Farol de Felgueiras and Farolins da Barra do Douro, the Jardim do Passeio Alegre is particularly worth seeing, which has been one of the most popular parks in the city since its opening in 1888. At its eastern end is the western terminus of the Linha 1 heritage tram, which winds along the Douro to the old town of Porto during a 23-minute ride.

Since we arrived on the first Sunday of the month, we actually wanted to go to the Museu de Arte Contemporanea da Fundação Serralves (“Museum of Modern Art of the Serralves Foundation”). It is the most important contemporary art museum in Portugal and housed in a museum building designed by Portugal’s star architect Álvaro Siza Vieira. The museum is located in the Parque de Serralves, a 18-hectare park, which was designed by the French landscape architect Jacques Gréber in 1932.

Therefore the entrance usually costs ten euros (five euros reduced). However, like many museums in Portugal, from 10 am to 1 pm on the first Sunday of the month, it is free! It was clear to us that this was not an insider’s tip, when we arrived punctually at 10 o’clock and saw the seemingly endless line at the entrance. As, after a few minutes of waiting, we saw a Yellow Bus passing by, we decided to first go into town to get a Yellow bus ticket there and then come back in the hope that the line would have vanished or at least shortened until then.

However, the festival of the students Queima das Fitas scotched that, because it took place in this very week. Accordingly, the streets were crowded and the traffic chaotic. Therefore, our plan to take the Yellow Bus back to the Museu de Arte Contemporanea de Serralves unfortunately failed. Probably we should have just stayed in line. So, if you want to visit the museum free of charge on a first Sunday of the month, you need to have enough time and patience.

In the evening we went to in the vegan-friendly Essência Restaurante Vegetariano, which offers special and fancy creations. Despite the very chic, upscale ambience, the prices are rather low. Both the presentation as well as the taste of the gourmet food could convince us completely. The many vegan options are clearly marked in the menu. So if you are looking for a fine dining, this is the perfect place!

The Casa da Música concert hall, opened in April 2005, is just a few steps away. It was designed by the Dutch architects Rem Koolhaas and Ellen van Loon and attracts immediately attention through its unusual architecture. It is located at the roundabout Rotunda da Boavista with the Praça de Mouzinho de Albuquerque in the center. Here, the Monumento aos Heróis e Mortos da Guerra Peninsular monument sticks up in the air. It commemorates the victory of the British-Portuguese alliance against Napoleon’s troops, symbolized by a lion pouncing on an injured eagle.

Peacocks stroll freely through the Jardins do Palácio de Cristal (Portuguese “Garden of the Crystal Palace”). The Pavilhão Rosa Mota event hall, built in 1952 on the site of the former Crystal Palace, was renamed to the honor of marathon runner Rosa Mota in 1991. The 10,000 seats hall is mainly used for basketball games and as a concert hall. From here you can admire the sunset over the Douro.

The hilly old town of Porto, which has been registered as a UNESCO World Heritage Site since 1996, is popularly known as Ribeira (Portuguese “Riverside”). Starting from the shore of the Douro, narrow streets with dense houses building wind upwards and thus form a terraces-like structure. Connected by the bridge Ponte Luís I, the sister city of Vila Nova de Gaia is located across on the other side of the Douro.

On the north-western edge of the old town, right on the Praça de Carlos Alberto, is the upscale restaurant O Caçula. Here you can sit on three floors indoors or outside, wind-protected and heated. In addition to really good smoothies, there are also vegan eating options, which are lovingly prepared and served. Since it is also a gourmet restaurant, you should plan your budget a bit higher here.

Not even 200 meters further south is the Igreja do Carmo. The baroque church, built between 1756 and 1768, is decorated with azulejos on the side facade. The pictures made of the blue-painted and glazed ceramic tiles are found frequently in Porto, for example in the Casa da Música or in the station São Bento. Across from the Igreja do Carmo is the Universidade do Porto, which, founded in 1911, is one of the largest state universities in Portugal.

Just a stone’s throw away is the bookstore Livraria Lello, which is rumored to have served Joanne K. Rowling as an inspiration for Hogwarts. The Harry Potter author lived in Porto for some time in the early 1990s and is said to have lingered also in this bookshop. The bookstore opened in 1906 and is considered one of the most beautiful in Europe and the world. Since 2015 visitors are required to pay an entrance fee of a few euros, which can be charged with a purchase.