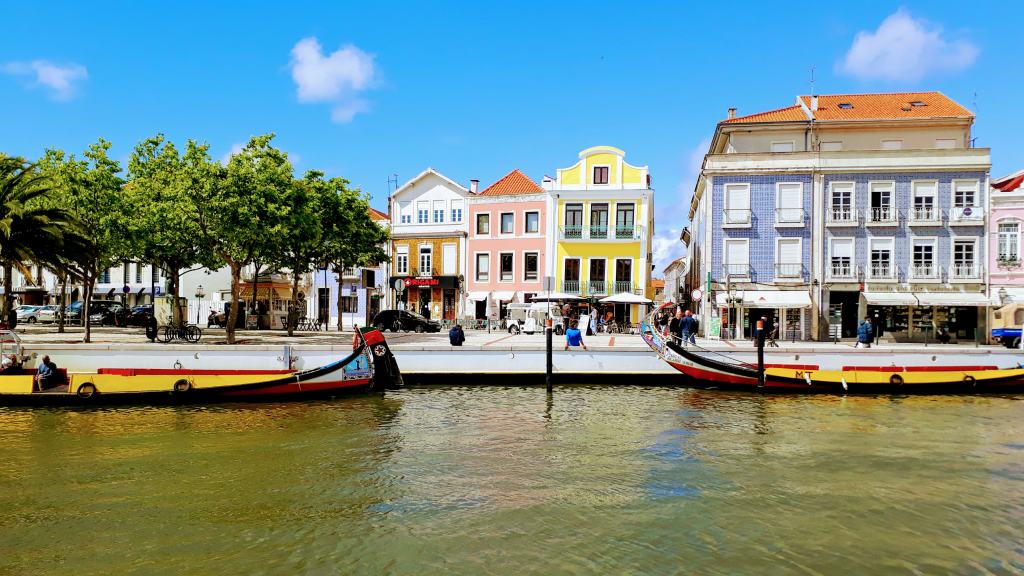 With its three canals Canal de São Roque, Canal de Pirâmides and Canal dos Santos Mârtir and the many Moliceiro boats, Aveiro actually reminds of Venice. The city on the coast of the Atlantic Ocean has not only a beautiful, compact old town, but also a great vegan offer. After Coimbra, it is the second largest city in the Região Centro.

Our video of Aveiro

Thanks to its compact size, Aveiro is very easy to explore on foot. But it can also be admired during a gondola ride, which is offered in the canals. For those who prefer cycling, the municipal facility Loja Buga offers free bike rental. You will find it in front of the Mercado Manuel Firmino market hall.

On Wikipedia we had read that the Talho Vegetariano (Portuguese “vegetarian butcher”) should be located in this very market hall. However, we have only found an empty shop below the sign. Whether it no longer exists or is being remodeled, we could not figure out.

When we reached Aveiro in the afternoon we were a little hungry, so we went to the vegan-friendly Saladas +. Here the focus is on healthy, fresh and inexpensive food. In addition to salads, there are sandwiches, soups and also a hot dish of the day, as well as various desserts. And: All dressings are vegan! The ambience is like its customers – young and hip.

Not far away is the almost completely vegan café A Mulata. We had brunch there the next day and were more than satisfied, although we shared only one brunch. Everything tasted delicious and this at an unbeatable price-performance ratio! In addition, the cozy atmosphere and the cordial café owner make you feel very comfortable. Whether sweet or savory; Breakfast, brunch, lunch or coffee & cake – you can’t go wrong here! Even the famous Portuguese Pastéis de Nata are vegan here.

A few steps along the Avenida Santa Joana is the Museu de Aveiro, which is located in the rooms of the former convent Mosteiro de Jesus. Close to it is also the Cathedral Igreja de São Domingos, dating from the 15th century. It is built in Portuguese-Baroque style and has been a national monument since 1996.

Right at the canal is the half-open and really beautifully designed shopping center Forum Aveiro (free WiFi!). West of it, in the historical center of Aveiro, is the City Hall (Câmara Municipal de Aveiro) with the Teatro Aveirense next to it, which was founded in 1879. However, the current repertoire includes much more than just theater: cinema cycles on specific issues, as well as concerts and guest performances are featured just as dance and exhibitions.

We were by pure chance on May 12 in Aveiro. What we didn’t know: This very day is a municipal holiday. Accordingly, we were surprised that some streets were covered with grass and straw. We are more like the religious-holiday-escaper and were not necessarily impressed by the pompous processions and gatherings. But after a few hours, the spell was over again.

Whereas really enchanting is the vegan-friendly café Espaço Criativo Biscoito. In the Portuguese flair of a grandmother’s living room you can get everything your heart desires: from savory food to regional drinks to desserts. Oh, and an incredibly fluffy milk froth in the cappuccino! Workshops are offered regularly in a second room.

Just a few steps away is the Igreja da Vera Cruz or Igreja da Nossa Senhora de Apresentação. Also to the purely vegan restaurant Musgo it isn’t far. We would have liked to have dinner here. However, since we had originally planned to drive straight further on the same day, we had no table reserved. Therefore, the quite large restaurant was already fully booked for this evening. So if you want to eat here, don’t forget to make a reservation in time!

Walking from the old town along the Avenida Dr. Lourenço Peixinho, you get in about fifteen minutes to the two train stations of Aveiro: Located next to the historic train station with its characteristic azulejos is the new station, which is connected to the Linha do Norte. It connects the two cities of Lisbon and Porto on a length of 336 kilometers, making it the most important railway line in Portugal.

With the quantity and diversity of the canals and bridges of the “real” Venice, Aveiro can not quite compete. Still, this cute little town is definitely worth a visit! Just around the Jardim do Rossio and the Canal Central it’s a bit too touristy for our liking but this will not harm the vibe of the colorful houses on the water. Also the wide range of vegan offers surprised us. We would come back any time!

One Reply to “Aveiro: Venice of Portugal”