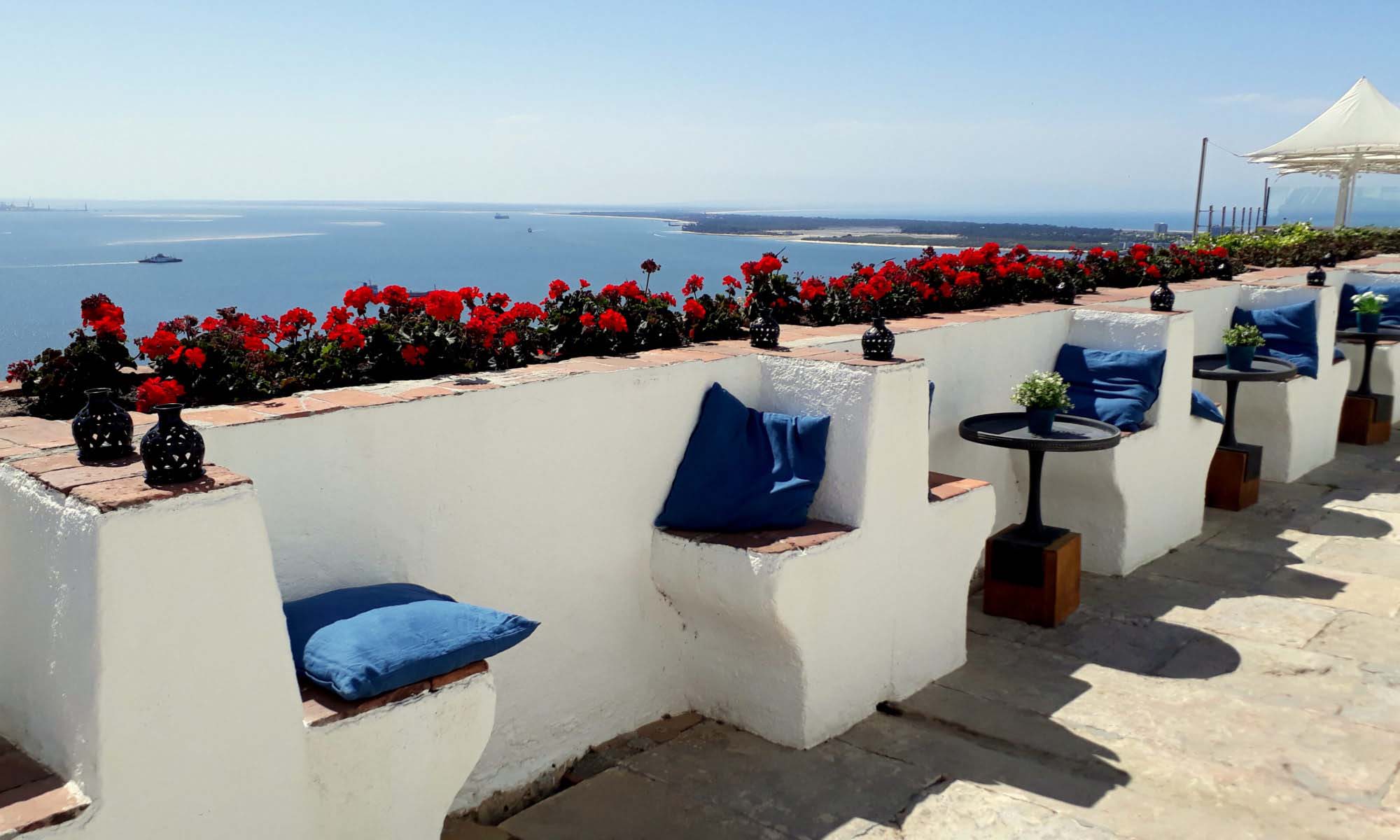 Also the other cities of the Região de Lisboa have a lot to offer. In addition to sights, fantastic beaches and the westernmost point of continental Europe, you can get also all kinds of vegan treats there. Moreover, we have two hostel recommendations for you as well.

Here you come to the other parts about Lisbon:

Our video of Lisbon

As in the first part of the Lisbon series, we will be showing you our Vegan Map for a better orientation. Based on the numbers you can understand, about which café or restaurant we are currently reporting. The numbers from 10 to 33 can be found in the first part about the food options in Lisbon.

North and West of Lisbon

In the town of Torres Vedras, about 50 kilometers north of Lisbon, you can get pampered by the raw vegan delivery service Rawvegansoulchef by Olokun. It is operated by Celia and Martin, who emigrated from Germany many years ago and opened the first completely vegan restaurant in Portugal. Now they deliver vegan and raw-vegan specialties, the ingredients of which are all organic and 70% of them are home-grown.

In addition to the numerous surf spots, there is also the 100% vegan food truck GREEN Balls & Burgers in Ericeira, located in a skate park (number 1 on the Vegan Map). Here you can enjoy a variety of vegan burgers and balls, all handmade. Since the food truck is open until summer on weekends only, we got our balls & burgers delivered. Directly from the truck they come in “classic” burger shape in bread buns.

On the way to Sintra, we first stopped at the organic farm Quinta dos 7 Nomes (number 2 on the Vegan Map). In addition to a large selection of vegan organic products, you can get freshly baked bread every Tuesday and Thursday. We were even invited to have lunch together with the residents.

In Sintra, there is much to see, since the cultural landscape of Sintra has been a World Heritage of UNESCO since 1995. Unfortunately, we had to realize, however, that almost all attractions cost money and not little: If you want to see everything as an adult, you will get rid of 66.50 euros. Of course, it’s pretty normal that the entrance of a tourist attraction is not free. In Sintra, however, all the surrounding parks cost an entrance fee as well, so you can not even look at most buildings from the outside. So absolutely no low budget recommendation at all!

Neither here vegans have to go hungry: in the medieval pub Casa do Fauno (number 3 on the Vegan Map) you can get a very tasty vegan sandwich and soy milk for all hot beverages, including hot chocolate! Moreover, you can sit comfortably outside, cuddle cats, enjoy the beautiful sunset and end the evening with a delicious drink.

In the typically Portuguese and artistically inspired Estefânea Café (number 4 on the Vegan Map) you can also eat vegan. Here we got a soup, a salad, garlic aubergine toast and for dessert even a vegan chocolate walnut date truffle.

Cabo da Roca is the westernmost point of the European mainland. There is plenty of cliffs, a lighthouse and a large cross. Actually, we had hoped to see a beautiful sunset here, but, well…you really see yourself.

The beautiful and bicycle-friendly town of Cascais has really grown dear to our hearts. It is only about 30 kilometers west of Lisbon and can be reached from there every 20 minutes with the Linha de Cascais (2.20 Euros / 40 minutes each way).

The fake suicide of the British poet Aleister Crowley, as well as the real suicide of the poet Guilherme de Faria at the Boca do Inferno (“Hell’s Mouth”), a chasm in the seaside cliffs, made the town world famous in the early 1930s.

Our first food stop is located between Sintra and Cascais in the shopping center CascaiShopping. At Vegana Burgers (number 5 on the Vegan Map) the name says it all: Here, you can get classic, colorful and fancy vegan burgers! You can also create your own burger. There are different side dishes, sodas and desserts as well.

Also The Cru – Organic, Raw & Healthy Food (number 6 on the Vegan Map) is located a little outside Cascais. As the name suggests, almost everything is organic, raw and healthy. In addition, more than half of the menu is vegan. In the very beautiful mixture between restaurant and shop you can enjoy delicious salads, wraps, smoothies, pancakes, chia puddings, brownies and much more.

Whereas in the middle of the old town, Mercearia da Vila (number 7 on the Vegan Map) is located. In addition to organic products for take away, there are also freshly squeezed juices, smoothies, various teas, toast, sandwiches and a daily changing lunch dish. For dessert, you can also get the raw-vegan tartlets from Ema-Cru. A dream come true!

The House of Wonders (number 8 on the Vegan Map) is probably the most famous vegetarian spot in Cascais. And not without reason: In the center of the city, there is, located on several floors, a restaurant, gallery, cafe and bar, including a rooftop terrace with sea views. In the inviting, unique and charming atmosphere you will be treated with all kinds of hot and cold vegetarian dishes, freshly squeezed juices and smoothies and raw-vegan desserts. A truly exceptional place!

Also ice cream lovers get their money’s worth in Cascais, namely at Gelateria Italiana Fabio Lupi (number 9 on the Vegan Map). In addition to the “ordinary” fruit sorbets, there are also more unusual vegan varieties such as avocado, dark chocolate and lemon-basil. You can enjoy these in a cup or cone – which can be found here also in a vegan (and gluten-free) version!

As in the fourth part about cheap accommodation in Lisbon, we would also like to recommend you again the Help Yourself Hostels Carcavelos Coast. It is situated between Cascais and Lisbon in Carcavelos and can be reached from Cascais every 20 minutes with the Linha de Cascais within 13 minutes for 1.60 euros. The hostel offers you not only a fully equipped open kitchen and some other common areas, but also a pool with sun beds! By the way, did we already mention that we stayed there for only 8 euros? 😉

Here you can book the hostel with a 10% discount.

South and East of Lisbon

Also south and east of Lisbon we have food suggestions in the cities of Almada, Sesimbra and Setúbal for you. In general, we can recommend you a trip to each of the three cities. And also here, we found a hostel which we particularly liked, but see for yourself:

Our video of Almada, Sesimbra & Setúbal

The city of Almada is located opposite to Lisbon on the southern bank of the Tagus River. The bridge Ponte 25 de Abril connects it to the Lisbon district of Alcântara. ALready from there, you can see the landmark of Almada: the 28-meter high statue of Christ Cristo Rei, one of the highest statues in the world.

It is a replica of two meters higher Cristo Redentor statue in Rio de Janeiro and depicts Christ with open arms, turning to the Ponte 25 de Abril and Lisbon. The statue stands on a 75-meter-high base, which is situated 113 meters above the Tagus.

The Veggie Lovers Truck (number 34 on the Vegan Map) is by its own account the first 100% vegan steet food truck in Portugal. It is located in the food court of the shopping center Almada Fórum. In addition to three burgers in organic quality, there you get also freshly squeezed juices and vegan mayo. For dessert you can choose between rice pudding, panna cotta and a brownie – all vegan of course!

The small town of Sesimbra is located about 30 kilometers south of Almada. The medieval castle Castelo de Sesimbra does not cost any entrance and is highly recommended. From here you have a beautiful view of Sesimbra and the nearby Arrábida National Park. Sesimbra itself is located on a coast with wide beaches and mighty cliffs.