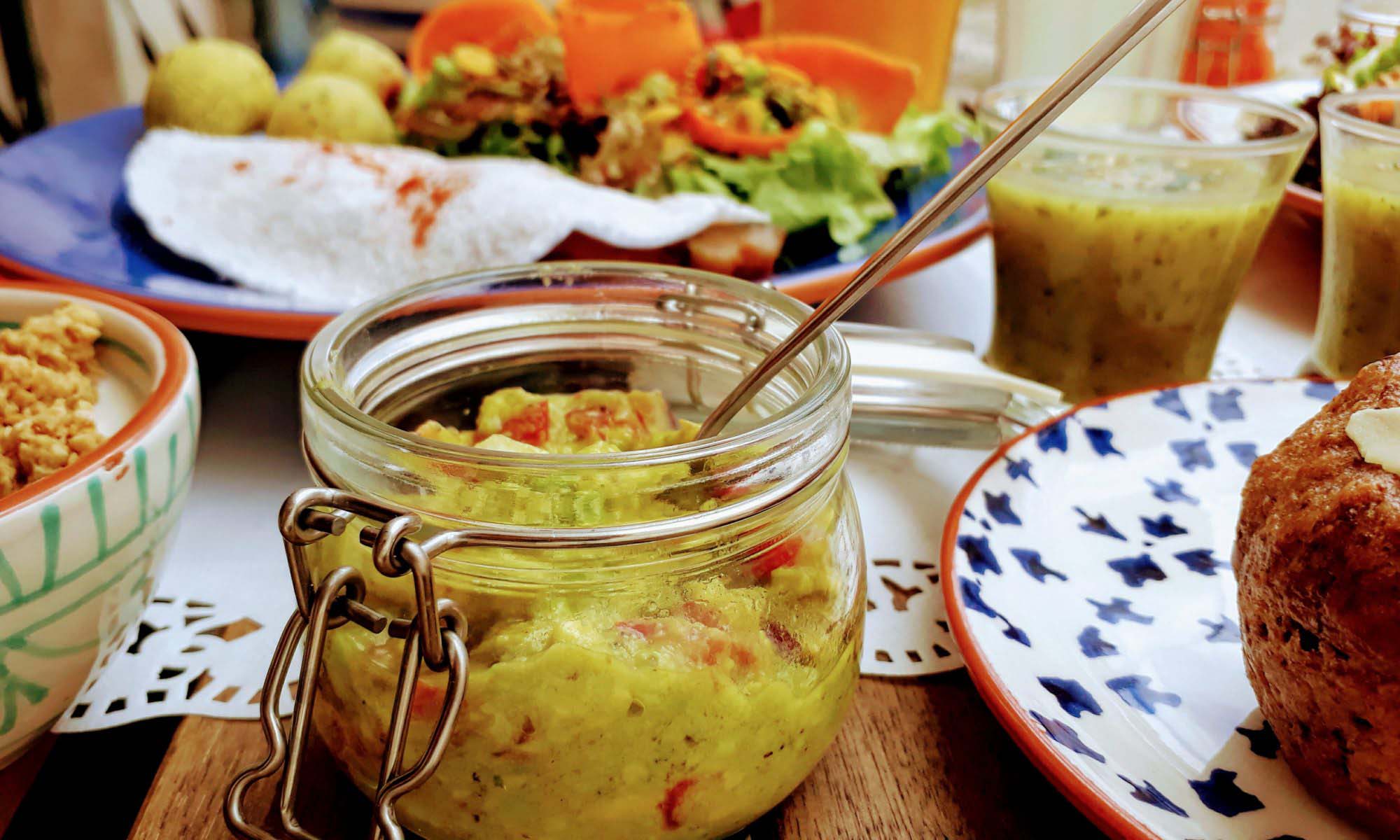 Anyone who knows me knows how much I love ice cream. To make sure you don’t have to miss out on delicious vegan ice cream in Lisbon either, we present you the most vegan-friendly ice cream shops in Lisbon.

The ice cream parlor FIB – il vero gelato italiano (number 16 on the Vegan Map) is located a bit outside, but the way there is definitely worth it! Here, all vegan varieties are clearly marked and include not only fruit sorbets, but also changing dairy ice creams, such as for example coffee ice cream based on rice milk.

Whereas in the heart of the old town is the Gelateria Fragoleto (number 18 on the Vegan Map). Again, there is a particularly wide choice of vegan dairy ice cream varieties and fruit sorbets, which are also marked. Ask necessarily for more vegan flavors, as not all are on display! Unique is here that you can take home the ice cream wrapped up in a Styrofoam ball.

Also at Gelato Mú (number 32 on the Vegan Map) the vegan varieties are marked and depending on the season. When we were there, besides fruit sorbets there was also avocado ice cream and chocolate sorbet, both very delicious! In addition to the main branch where the ice cream is made, there is another one at the Miradouro de São Pedro de Alcântara.

Gelato Davvero (number 33 on the Vegan Map) is not only scattered several times in Lisbon, but also a few more times in all of Portugal. Here the allergens are clearly marked, whereby the vegan ice creams are quickly found. When we were there, there were “only” fruit sorbets. The available varieties depend on the season. Cone lovers will rejoice, because they are vegan ones available here.

In the “ice cream office” Oficina do Gelado (number 23 on the Vegan Map) in the Parque das Nações they unfortunately don’t have any vegan types of dairy ice cream, but very tasty fruit sorbets. The employees know which flavors are vegan, and who knows – maybe they’ll have some vegan dairy ice cream varieties someday!

For all those who already are fed up with sweet things by reading and looking at the photos, who prefer the savory things or love the combination of both, for those we of course have also vegan(-friendly) restaurants in Lisbon on hand!

The all vegan Sabor Superior (number 10 on the Vegan Map) is located west of Lisbon near the Torre de Belém. It was the first restaurant we went to. And it did not disappoint us: we had two very tasty main courses, freshly squeezed juices and cakes for dessert. The menu changes daily.

Even as non Krishna adherents you can eat very well in the garden of Hare Krishna Lisboa (number 13 on the Vegan Map). There is a daily changing menu at a fixed price, consisting of soup, main course, dessert and tea. It’s usually completely vegan – so asking in advance is worth it. Because then you get fresh Indian food at a very low price.

The entirely vegan Jardim das Cerejas (number 15 on the Vegan Map) offers a very extensive and delicious all-you-can-eat-buffet for the price of 7.50 euros (for lunch) or 9.50 euros (for dinner). Drinks and dessert (highly recommended!) are not included, but are well priced as well. The Indian-inspired dishes consist of four to five changing hot dishes, as well as rice, couscous, soups, pastries and various salads. Oh, did we already mention that it’s located centrally in the old town?

We continue with Focaccia in Giro (number 17 on the Vegan Map), who are, right, specialized in the Ligurian yeast dough flatbread from Italy. From a food truck a small shop has developed here. Vegan options are “Mela Verde” (black olive pâté, tomato, zucchini & apple) and “Melanzana” (eggplant, hummus & spinach), sometimes there are more. In addition, they have non-dairy milk for coffee and homemade lemonades.

TOO Naturally Healthy Food (number 20 on the Vegan Map) is a take-away only store, so here’s everything to go. You can chose from a wide selection of savory and sweet dishes, all of which are vegan. From snacks to beverages and salads to complete meals, everything is there. These can be consumed nicely in the nearby Jardim do Príncipe Real. The packaging is, of course, environmentally friendly recyclable and compostable.

The vegan brunch at 39 Degraus Restaurante Bar Cinemateca (number 21 on the Vegan Map) is more than convincing. In several courses and in combination with buffet we got all sorts of savory and sweet treats. Among other things, there was even vegan cheese! If you go to the brunch, you should bring a lot of hunger. As the name suggests, the restaurant is located above Cinemateca Portuguesa, the state film museum and film institute of the Portuguese film.

The Hamburgueria do Bairro (number 24 on the Vegan Map) has several branches in Lisbon. We went to the one in the Parque das Nações. There were five vegetarian burgers, all of which can be ordered vegan. Otherwise, they may contain non-vegan sauces. This also applies to the dip of the sweet potato fries: We could easily change vegetarian mayonnaise to vegan mayo. Also the garlic bread is vegan.

Lisbon Vegan Restaurante (number 25 on the Vegan Map), as the name implies, is a purely vegan restaurant in Lisbon, which is very similar in concept to Jardim das Cerejas. Here, too, there is an extensive and delicious Indian all-you-can-eat buffet, also with four to five changing hot dishes, as well as rice, couscous, soups, pastries and various salads. The restaurant is located a bit further outside and the atmosphere could be improved, however, the buffet costs here only 6.90 euro at noon and 7.90 euro in the evening. Drinks and dessert (highly recommended!) again cost only a small extra charge.

Ao 26 – Vegan Food Project (number 26 on the Vegan Map) is also a wholly vegan restaurant, which offers a daily changing menu as well as salads, burgers, fries and sandwiches. In addition there are typical Portuguese snacks. Among the desserts there are also raw, gluten- and sugar-free options. The restaurant is located in the old town and can be reached by the famous tram line 28E.

The Restaurante Vegetariano Alfarroba (number 27 on the Vegan Map) is open during the week for lunch and serves almost exclusively vegan stuff. In the self-service style you can choose between three main dishes, two of which were gluten-free during our visit. This gets along with brown rice and salad. Among the desserts there are some with honey, so make sure to ask here!

In the vegetarian-vegan restaurant Jardim dos Sentidos (number 28 on the Vegan Map) you get a delicious and extensive all-you-can-eat buffet for 8.90 euros (on Saturdays 12 euros). In the evening you can eat à la carte. All vegan and gluten-free options are clearly marked and include also dessert. The restaurant is quite chic and one can sit outside very nicely and cozily.

The also fully vegetarian Oasis Vegetariano (number 29 on the Vegan Map) focuses on healthy food. There are four different dishes every day, of which one or two are vegan. These are served with rice and salad. To this you can drink freshly squeezed carrot, apple or orange juice.

Also the vegetarian restaurant Paladar Zen (number 30 on the Vegan Map) offers an all-you-can-eat-buffet for lunch and dinner with many marked vegan options. Among them are four to six hot dishes, homemade soup, vegan sushi and 12 different salads. In addition, there are many freshly squeezed juices and also vegan desserts, such as apple crumble.

PSI – Restaurante Vegetariano (number 31 on the Vegan Map) is one of the oldest vegetarian restaurants in Lisbon – if not the oldest. The mix of Asian and international dishes includes many vegan options, which are marked on the menu. Also the location is special: Whether in the half-open glass pavilion or in the shade of the many trees, you feel as comfortable as in your own garden and can escape the bustle of the big city during a delicious meal in a very relaxed atmosphere.

Also in Portuguese supermarkets, there are all sorts of vegan food to feast. Especially the selection of plant milk is large – but you don’t have to go without ice cream, cheese and sausage alternatives either. We’ll tell you where to find what.

No, we don’t want to show you another milk alternatives shelf, which you will find in every supermarket – no matter how small it is. Whether the Portuguese have a similar common lactose intolerance as the Spaniards or whether they are just into vegan milk – we don’t know, we basically don’t really care either. Because what counts is that everyone gets their favorite milk, no matter whether soy, oat, coconut, almond, rice, spelt, a combination of the aforementioned, or something completely different.

Cheap vegan dairy ice cream, however, is unfortunately still not so self-evidently found at the supermarket. But that’s exactly what we found: Namely at Pingo Doce, Portugal’s second-largest supermarket chain. Delicious vanilla ice cream on a coconut base, without soy, 500 ml for 2 euros. Whether they will have more varieties soon, we don’t know. Until now, we’ve only found this one and pepped it up with cinnamon cookies and chocolate sauce. 😉

If you know the French department store chain Auchan, some products at Jumbo might be familiar to you, since this supermarket belongs to the Auchan group. Just like Auchan in France or Alcampo in Spain, Jumbo stores are huge and can be compared with a Walmart or Tesco. In other words, you can basically find almost everything here, including a larger selection of vegan cheese, cold cuts and sausage. Fruit and vegetables are also extremely cheap here.

Of course, that was just a mini-selection from the huge vegan assortment in Portugal and should only provide a brief insight into what attracted our attention the most. Soon there will be a separate blog article about vegan supermarket products in Portugal.