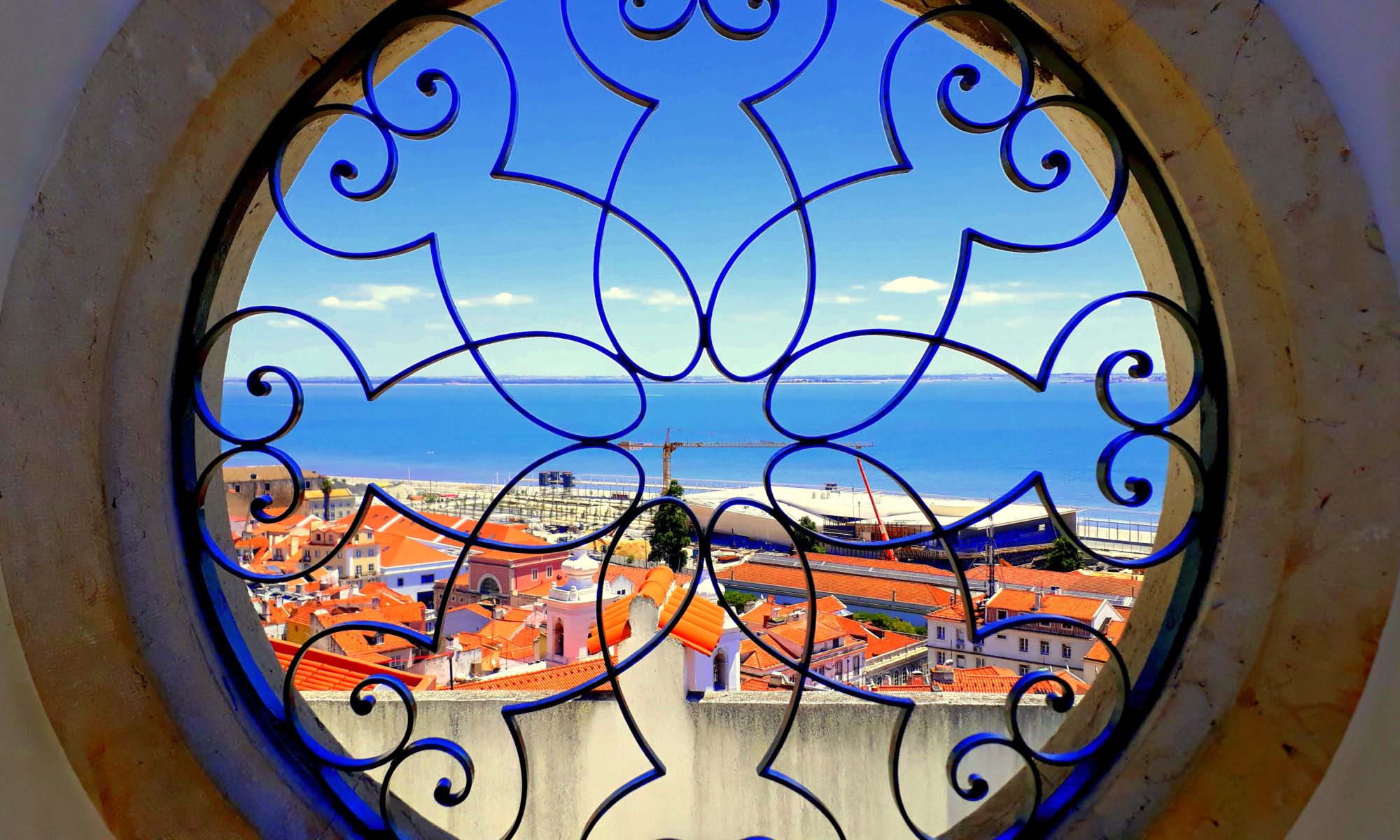 Let’s continue with the viewpoints or – as they are called in Portuguese – with the Miradouros. There are heaps of them in the hilly city on the Tagus, each one special in its own way. We show you our personal favorites and tell you how to get there.

The Miradouro de Santa Luzia (yellow number 1 on the Sightseeing Map), together with the Miradouro Portas do Sol, is our top favorite. They are very close together, so the view from both viewpoints is very similar.

In fact similarly impressive: From here you have a wonderful view over the historic quarter of Alfama and the two churches Igreja de São Vicente de Fora and Igreja de Santa Engrácia, which is why the two Miradouros are regarded as one of the best window over Lisbon and the Tagus.

Right next to the viewpoint is the eponymous church Igreja de Santa Luzia. On its facade two Azulejos (tile paintings) can be seen: One picture shows Lisbon before the great earthquake of 1755, the other one the legend of Martim Moniz. By the way: The cover picture of this article is from the Miradouro de Santa Luzia.

From the Miradouro das Portas do Sol (yellow number 2 on the Sightseeing Map) probably originate most of the typical travel guide photos of Lisbon Old Town. That’s no surprise, after all, here you get a magnificent view over the maze of alleyways of Alfama, from which the churches Igreja de São Vicente de Fora and Igreja de Santa Engrácia stand out.

Oh yes, also the Miradouro da Graça (yellow number 3 on the Sightseeing Map) is definitely one of our favorites, especially at sunset. It was officially renamed as Miradouro Sophia de Mello Breyner Andresen. But it is still mainly known under the old name.

Right next to the Igreja da Graça there’s a small café. There you can sit down, have a drink or a snack and enjoy the fantastic view. Or just sit on the wall and watch the setting sun immersing Lisbon completely in a warm light. Around the corner there are even public toilets.

Also here you get by the popular tram line 28E: Just get off at Graça station and walk about 300 meters via Largo da Graça to the viewpoint.

The Miradouro da Nossa Senhora do Monte (yellow number 4 on the Sightseeing Map) is the highest viewpoint in Lisbon. Therefore, you have an impressive view of the Castelo de São Jorge, the Tagus and the Ponte 25 de Abril, up to the 28-meter-high statue of Christ Cristo Rei on the other side of the river.

We were led there by the Renault Twizy, which we have already introduced you in detail in the second part of the Lisbon series. But also here you can take the tram line 28E as well: stop Rua da Graça and then following for about 300 meters the Rua da Senhora do Monte to the west.

Also very well-known is the view from the Miradouro do Parque Eduardo VII (yellow number 5 on the Sightseeing Map). Over the largest urban park in Lisbon you can look in the direction of Praça Marquês de Pombal up to the Tagus. The large green area was opened at the beginning of the 20th century as a “green extension” of Avenida da Liberdade. Francisco Keil do Amaral designed the park, which connects directly to the Praça Marquês de Pombal, with numerous symmetrically arranged hedges.

The former British king and eponym of the park Edward VII visited Portugal in 1903. In order to symbolize the good relations between the United Kingdom and Portugal, the city administration named the park without further ado after the royal visitor.

On the north-western side of the park is the botanical garden Estufa Fria (“cold greenhouse”). Here, numerous exotic plants, for which the Lisbon climate is compatible, find their place. Part of the complex is also the glazed Estufa Quente (“hot greenhouse”), in which tropical plants that need warmer climate conditions can be seen.

To this viewpoint you come by sightseeing buses, with the blue metro Linha Azul (Station Parque) and with numerous buses:

The Miradouro de São Pedro de Alcântara (yellow number 6 on the Sightseeing Map) is the last viewpoint we would like to introduce you. It is a higher terrace with benches and views over the city up to Castelo de São Jorge. Perfect to lap up a delicious ice cream from Gelato Mú!

Right next to it is the Elevador da Glória funicular, opened in 1885. Passing street art, it overcomes 48 meters height difference on 265 meters (maximum slope 18 percent) and thus connects the Miradouro de São Pedro de Alcântara with the Praça dos Restauradores. By the way: the Elevador da Glória is included in the public transport day ticket!

Praça dos Restauradores is served by bus lines 207, 709 and 711 and the blue metro Linha Azul. From there you can then travel the steep climb either with the Elevador da Glória or on foot. If you do not feel like doing so, you can also take buses 202 and 758 (stop São Pedro de Alcântara) to the viewing platform.