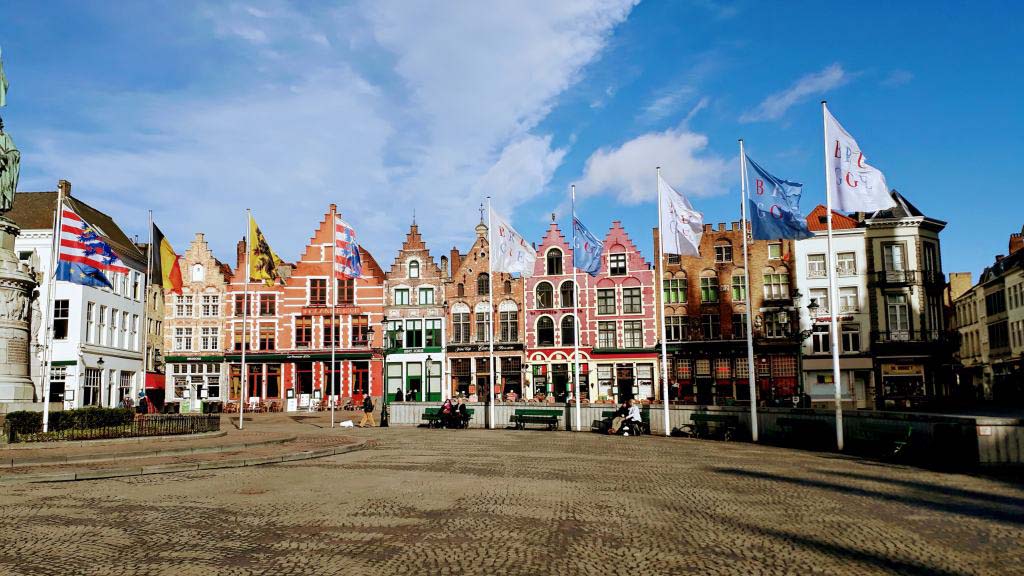 After visiting Maastricht and Brussels, we decided to make a short detour to the north of Belgium before going on to the next megacity. And we can say: The trip to the European Capital of Culture of 2002 was totally worth it.

With nearly 120,000 inhabitants, Bruges is not exactly one of the largest cities in terms of population, but in our opinion it is certainly one of the most beautiful. Since it was spared from wars and large-scale fires, its medieval townscape is well preserved and has been a UNESCO World Cultural Heritage since 2000. Because of the many canals, which are also called Reien, after the river Reie, which was once flowing through the city, and the many arch bridges Bruges is often referred to as the “Venice of the North”. We too felt strongly reminded of the Northern Italian city as we crossed over some bridge. The one or the other knows the city perhaps also through the film “In Bruges” from the year 2008.

As always, we rode into the town with our bicycles, however the old town of Bruges is also easy to explore by foot or even by boat. Our route took us through the beautiful Smedenpoort, but also the other city gates (Kruispoort, Ezelpoort and Gentpoort) are worth seeing. Before heading to the main attraction, the market square, we went first to St. Salvator’s Cathedral and then directly to the Church of Our Lady. Crossing the Bonifacius bridge and the Arentshof, we came to the Dijver, an often photographed canal, from which one can make a boat trip. Over a small bridge, we finally reached the Burg square, architecturally the most important square in Bruges. There you can see not only the City Hall, but also the Basilica of the Holy Blood (the oldest sacred building in the city), built in the middle of the 12th century, where one of the most important relics in Europe, an ampoule with the blood of Christ, is kept.

Through the Breidelstraat we came directly to the Grote Markt, the large market square in the heart of the old town, which once could be reached by ship in the Middle Ages. Where today is the Provinciaal Hof (Provincial Palace) with the Historium, which visualizes a historical version of the medieval city of Bruges in the time of Jan van Eyck (~ 1390–1441), stood from 1294 to 1787 the cloth hall (called “Waterhalle”), in which fabrics were stored and traded in the dry. In the south of the market stands the 83 meter high Belfry, which was also built in the 13th century and was included in the UNESCO list as a cultural monument in 1999. As the tallest building in the city, the tower demonstrated the power of the wealthy bourgeoisie, and even today no new building is allowed to surpass. It has a 366 steps high viewing platform, accessible by the public for an entry fee. At the same altitude is the Carillon – a bell-tower with 47 bronze bells from the 17th century, which chimes every Wednesday, Saturday and Sunday at 2.15 (p.m.).

Before we cycled back to the car, we made a little detour to the Jan van Eyck Square, where a monument of the Flemish painter, who is regarded as the most famous representative of the old Netherlandish painting, can be seen.