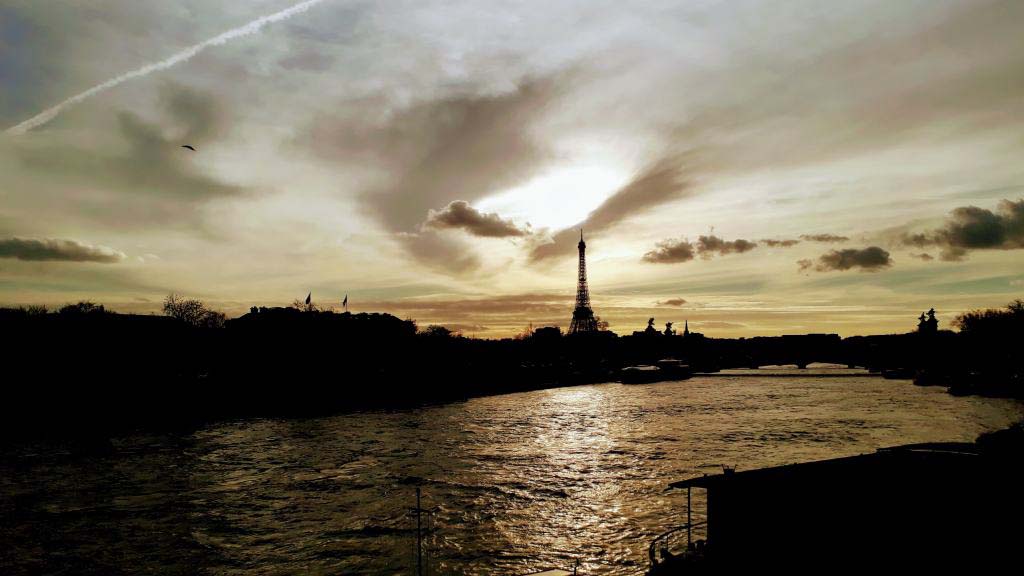 Paris. A city with a lot of tourists. A whole lot of tourists. And even more inhabitants. Over 2.2 million in a city area of only 105 square kilometers and thus the fifth largest city of the European Union and the densest (about 21,000 inhabitants per square kilometer) populated in Europe. With more than 12.4 million people in the metropolitan area, also the second largest in the EU. What we think of the city of love on the Seine, you will learn here.

Our video of Paris

After Bruges and nearly four hours of driving through the rain, we stayed at the Oise-Pays de France Regional Nature Park to sleep. The next morning we first went to one of the seven Ikea in/around Paris to again write a little bit on the blog, upload pictures, edit videos, etc.

We got lunch and dinner at the same time in the purely vegetarian and wonderfully centrally located Paradis Marguerite, diagonally opposite from the Notre-Dame (which even can be seen from the winter garden). And what can we say: We actually felt like in paradise! Already the mango-lavender smoothie with – brace yourself – vegan frozen yogurt was a dream. The Velouté de Butternut, as well as the Chili Verde, which was recommended to us, were super delicious and yet we felt like eating something healthy. For dessert we had Yolita Végan au fruits frais: vegan frozen yogurt with fresh fruit, which was served to us very nicely in a small flower pot. The portion was huge and easily enough for the two of us. Our visit was actually planned as lunch, but afterwards we were saturated for the whole day. We can really recommend everything we have eaten there!

Since the last shower already was a while ago, we went for a swimming pool afterwards. The search for a still open swimming pool turned out to be not that easy and when we finally found one, it indeed was only showering for us this time, as we didn’t wear the obligatory bathing caps and also didn’t particularly felt like buying one. Well, the purpose was fulfilled anyways: Smelling good again, we went back to the car to find a place to sleep.

The next morning we checked out a new Ikea (Villiers sur Marne). However, since the wifi wasn’t working, we fastly were outside again and after a quick breakfast (as almost always cereals) we stroke out in the direction of Paris center. By bike, we searched our way through the partly very chaotic road traffic, lost ourselves shortly in the city forest Bois de Vincennes, took a break after an hour ride at the Lac Daumesnil and finally reached the somewhat disappointing Place de la Bastille. The July Column was wrapped up in advertisement and also the opera house couldn’t delight us too much. Perhaps that also was because we were a little exhausted, hungry, thirsty and frozen.

We drove by the Marché Bastille to the small, purely vegan and raw Love me cru, where we ate a kind of falafel sandwich and drank a cold-pressed juice with beetroot and ginger. For dessert, we had a chia pudding with banana and linseed.

Afterwards, we started off with sightseeing: first we went to the beautiful Sacré-Cœur de Montmartre, then by the Moulin Rouge to the Arc de Triomphe and finally to the world famous Eiffel Tower.

After we had checked off the two probably most famous landmarks, we passed the Pont Alexandre III and the Grand and Petit Palais to the Place de la Concorde. Then we went on to the Louvre with its famous glass pyramid and again to Notre-Dame.

Then we drove to Miznon, an exceptional restaurant, where you can eat whole, roasted heads of cauliflower for example. There are a lot of vegan options. We opted for “brochettes rouges” and “choux fleurs blisés” (both in pita) and a sweet potato, which was brought to us as roasted, whole tuber. Everywhere in the restaurant, vegetables are distributed as decoration, overall the atmosphere is rather rustic. For sensitive vegans may not be recommended, as in the open, for the guests visible kitchen also meat is prepared. Otherwise, a different, unusual and also delicious dining experience.

Thereafter, we went all the way back to the car. We passed the Place de la Bastille again, which in the dark and well-saturated, didn’t look that bad after all 😉 Nevertheless, Paris as city – apart from the food – probably won’t make it to our favorite cities, overall it’s too crowded and stressful for us.