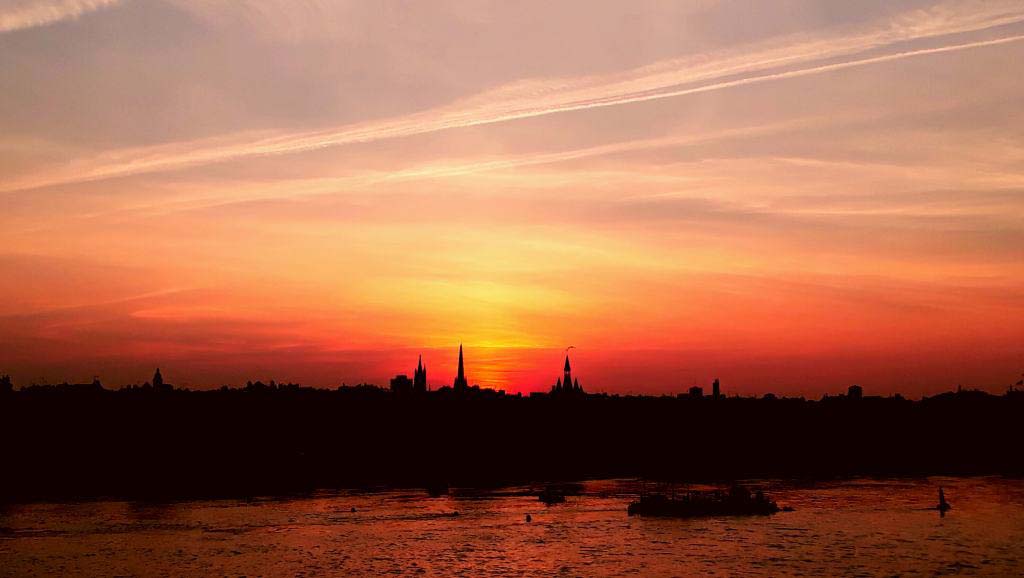 Known primarily for the Bordeaux wine, the university town, which has been on the UNESCO World Heritage list since 2007, has a lot more to offer: being the political, economic and intellectual center of the French Southwest, we’re not only enchanted by the old town and the Roman amphitheater, but above all by the beautiful promenade along the Garonne.

Before exploring the city, we treated ourselves to a visit to the Calicéo Bordeaux. With 15 € for two hours, the spa is not exactly cheap and sticks out clearly from our normal budget, but also has a lot to offer and is really beautifully made. Above all, the heated outdoor pool gave us the opportunity to enjoy the sun outside in spite of low temperatures.

On the way to the old town we first came across the museum “La Cité du Vin”, which opened in May 2016. The 2,500 reflective aluminum panels on the façade of the building’s 55-meter high tower are designed to imitate the glinting of wine in a glass. Anyone who knows us, also knows that we are no wine drinkers and generally do not approve of alcohol, so the interior of the museum, which was co-financed among others by the EU, did not interest us any further.

We reached the old town via the Pont de Pierre, which is the oldest stone bridge over the Garonne in Bordeaux. It was planned as early as 1810, the very difficult construction due to strong currents, however, took place only from 1819 to 1821.

There we first went to the gothic-flamboyant Basilica Saint-Michel with the “Flèche” called freestanding tower, which with a height of 114 meters surpasses the two 81-meter-high towers of the cathedral Saint-André and since its establishment in the 16th century was the tallest building in Bordeaux for a long time.

We continue through the triumphal arch Porte d’Aquitaine from the mid-18th century and the city center to the Romanesque-Gothic cathedral Saint-André, which is one of the largest cathedrals in France, with a length of 127 meters. The freestanding tower Pey-Berland in flamboyant style was added between 1440 and 1450. With a height of 50 meters it is the highest public viewpoint of the city.

On the way to Palais Gallien we crossed the very beautiful Place Gambetta. Contrary to its name, the Palais Gallien does not refer to a palace, but to the remains of a Roman amphitheater from the 3rd century, which once housed up to 15,000 spectators.

Through the Jardin Public, we arrived at the Place des Quinconces, which is one of the largest squares in Europe with an area of 126,000 square meters. During our visit, a fair was held. The name of the square comes from the French term for the arrangement of many adjacent dices with the number five, according to which pattern the trees planted thereon in 1818 are arranged.

The square ends in the west with a semi-circle, on which stands the 43-meter-high statue of liberty Monument aux Girondins, reminding the deputies of the Gironde, who became victims of terror during the French Revolution.

Afterwards we cycled the promenade along the Garonne back to Pont de Pierre and weren’t surprised that this part of the city was declared a UNESCO World Cultural Heritage in 2007. We came across countless joggers, cyclists, inline skaters, and however-moving people. The setting sun bathed everything in a beautiful, warm light, and we gazed at the magnificent buildings, such as the Palais de la Bourse.

Back at the car, we drove further south and discovered a tempting stopover before our next destination, Bayonne, but more in the next travelog.