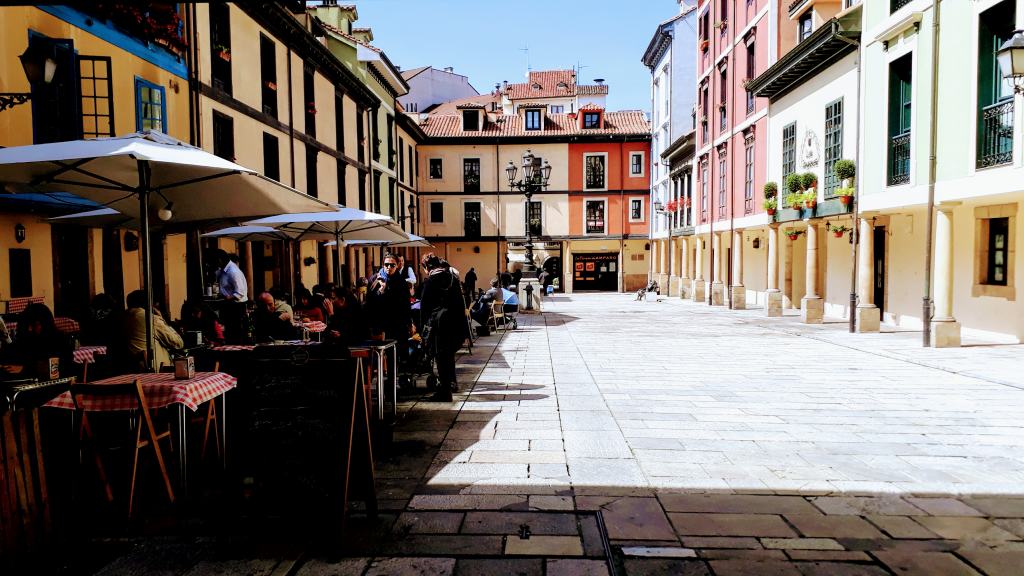 Since its foundation in the 8th century, the former town of Ovetum was closely linked to the Asturian monarchy, which is why the old town is characterized by medieval influences. At that time the capital of the kingdom, it is still the capital of Asturias and also a model for the town of Vetusta in Leopoldo Alas’ novel “La Regenta”.

Our video of Oviedo The city is of great importance also for the Way of St. James: King Alfonso II moved from Oviedo to Santiago and is therefore supposed to be the first St. James pilgrim. He is said to have opened the Camino Primitivo, the first Camino route. The Way of St. James, though a “byway”, provided for an economic revival of the city throughout the Middle Ages.

Once again, we first went to Ikea to continue working there on the blog and videos. And, lo and behold: It was the first time that we saw that Ikea had, in addition to cow’s milk, also soy milk on offer for the (with the family card) free coffee. So now we could also drink our white coffee while eating the vegan Grönsaksbullar.

We were also at Ikea when we made the decision to rename us from Vegan Travel into The Vegan Travelers and switch to the corresponding domain. What induced us to do so you can read here. Why we write ourselves with only one “l” you can learn here.

Of course we were not only at Ikea, but also in the city center, for example, to eat at the Brötchen Café. In the cozy atmosphere of a private living room you can choose from a wide range. We opted for a chocolate shake, a smoothie bowl, a well-stocked bagel, and a breakfast muffin. All this tasted great! Most vegan options are indicated in green in the menu, even though some are hidden in between, but they are easily recognizable (such as smoothies).

The entire old town center of Oviedo is a pedestrian zone. It is home to the most important monuments, such as the Cathedral of San Salvador (UNESCO World Heritage Site) built between 1388 and 1539 mainly in the Gothic style, the University (established at the end of the 16th century by the Catholic Archbishop Fernando Valdés Salas) and the Plaza de la Constitución with the town hall and the Church of San Isidoro (both from the 18th century).

In Oviedo there are some more interesting squares like the Plaza del Fontán next to the market hall of the same name. On every Thursday, Saturday and Sunday there is a market where you can buy not only food, but also clothing, shoes, handbags, jewelery and more. The Plaza del Paraguas also housed a market and got its name from the design which is similar to an umbrella (Spanish “paraguas”).

A few steps from the cathedral is the almost purely vegan restaurant and cultural center Manglar, which we even visited twice: once at noon for the Pinchos and then again in the evening. As an appetizer we got three different dips with plenty of bread, after which we felt already well saturated. Nevertheless, we could not resist the main course, a seitan kebab with couscous and a vegan burger with fries. But it also just tasted too good!

With round bellies we left not only the cultural center, which regularly hosts concerts, talks and other events, but also Oviedo to discover even more of Asturias!