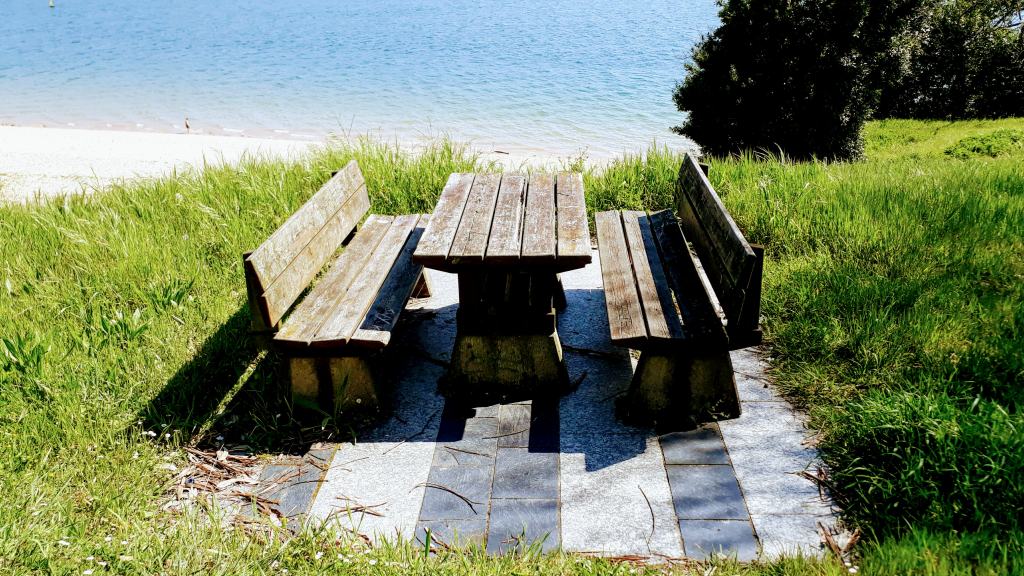 Ferrol – the birthplace of Spanish dictator Francisco Franco has been suffering from population decrease for years, which is directly linked to the rapid growth of the contiguous Narón. Neither we were able to take too much pleasure in the town. Nevertheless, here are a few impressions for you.

At first we were actually quite enthusiastic, namely about the picnic table with the most beautiful views we had ever had on our trip from a picnic table. Around us only the sea, beach, grassy meadow and trees (and on the other side of the estuary, some other city. 😀 Whoever is interested, this table is right here.) For this purpose, of course we made us a delicious sandwich with guacamole, vegan chorizo, lettuce and cucumber (all from Alcampo).

Afterwards we drove to the Castelo de San Felipe, a former military fortress from the 16th century about ten kilometers from Ferrol. Already the way there did not give us much joy: partly tiny alleys winding through the mountains and villages. The fortress itself, which is open daily between 10 am and 2 pm and 4 pm and 8 pm, can be visited free of charge; we wouldn’t have paid for it anyway.

The castle resembles a ruin and is in our opinion not particularly worth seeing, but whoever catches clear weather can perhaps recognize the Castillo de San Martín on the other side of the Ría de Ferrol. It was once connected to the Castelo of San Felipe by a thick chain that prevented enemy ships from reaching Ferrol through the estuary.

For others an arrival reason, for us an escape motif: In Ferrol, the typical Spanish processions take place every year during the Easter week Semana Santa, following the example of Seville. The Ferrol version are the largest and most important processions in Northern Spain and therefore considered a “national tourist interest”. The Semana Santa is the most important festival of the city throughout the year and is visited by many tourists.

Anyway, we were glad to escape this religious-touristy hustle and bustle and drove on to A Coruña, where we luckily did not notice anything about it. Overall we were rather moderately impressed by Ferrol and would say that this city isn’t a must-see.