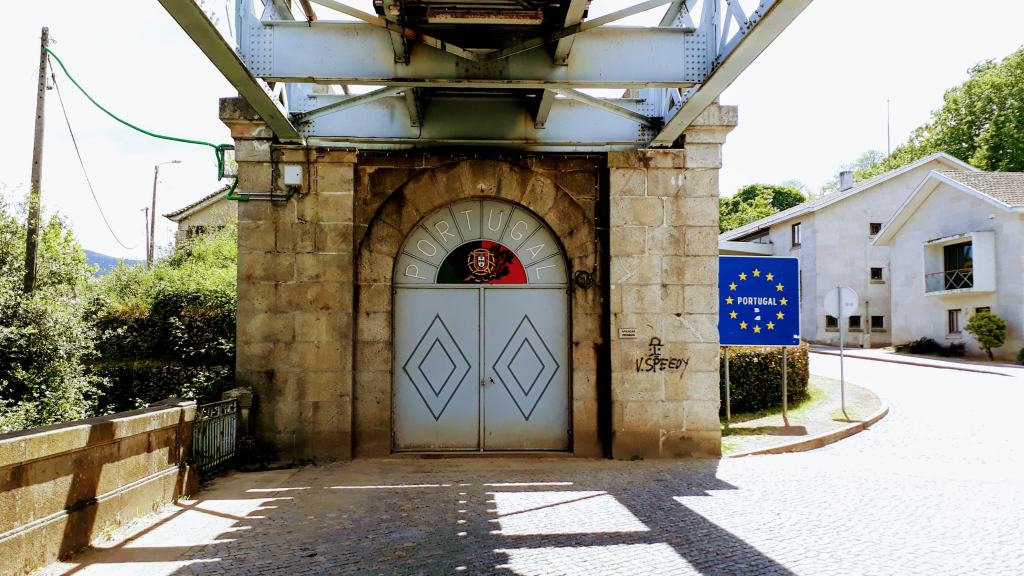 Yay, a new country! After the Netherlands, Belgium, France and Spain, Portugal joins our European tour as the fifth state. The border crossing consists of the special two-storey iron bridge Ponte Internacional.

After we – as you know – have spent some time in Galicia, we visited the two border towns Tui (on the Spanish side) and Valença (on the Portuguese side). The sister towns are separated by the river Río Miño (Spanish and Galician) or Rio Minho (Portuguese), which also marks the border between Northern Spain and Portugal. That way, the two places are only a few hundred meters apart.

From Vigo we drove to Tui, a municipality with just 17,000 inhabitants. On the part of Galicia, it forms the most important border crossing to Portugal. The most important and pretty much also the only attraction is the Santa María Cathedral. The episcopal church of the Diocese of Tui-Vigo was begun in Romanesque style in the first half of the 12th century and completed in Gothic style in the 13th century. It is situated on a hill, which is connected to the old town of Tui, above the Río Miño.

The 318-meter-long lattice truss bridge Ponte Internacional (Portuguese and Galician) or Puente Internacional (Spanish) over the Portuguese-Spanish border river Río Miño/Minho has two levels: the lower is for road traffic, the upper for rail transport.

Just like Tui, it is a station of the Portuguese Way of St. James from Lisbon to Santiago de Compostela. However, the Portuguese town of Valença is with about 3450 inhabitants much smaller than its border sister. In return, it has a very worth seeing medieval castle complex with a fully-preserved fortress wall.

Within the city walls are now tourist shops, cafes and restaurants. The historic center of Valença is truly beautiful, even though, or perhaps because you feel like you are walking around in a recreated hamlet of a theme park. From here you have also a magnificent view of the Ponte Internacional and the Río Miño/Minho. This delicious vegan ice cream is available at Lidl in two varieties (“Mango & Passion Fruit” and “Red fruits”) in Spain, however not in Portugal! 😉