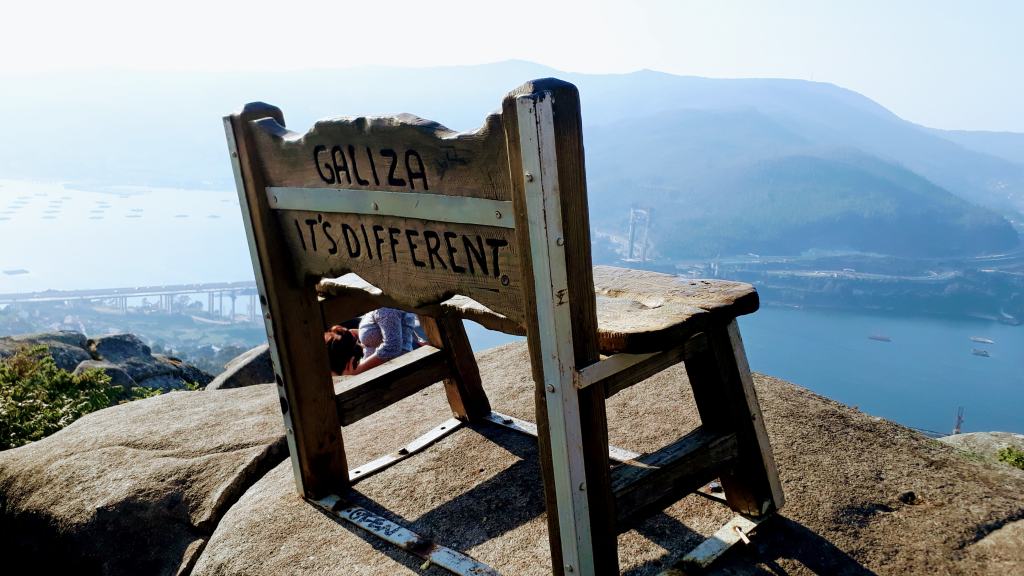 Rías Baixas – that’s the name of the four narrow coastal inlets in the south-west of Galicia from Cape Finisterre to the Portuguese border. They have emerged from flooded river valleys and consist of the Ría de Muros, the Ría de Arousa, the Ría de Pontevedra and the Ría de Vigo.

As we traveled from Santiago de Compostela to the “rest” of Galicia from north to south towards Portugal, we first came across the Ría de Muros, the northernmost inlet of the Rías Baixas. After we had stayed in Noia for the night, we drove on towards Castro de Baroña, but stopped about three kilometers before in a parking lot with sea view (Mirador De Fonforron) to have breakfast there.

Having arrived in Baroña, we were initially puzzled by the absence of people. We did not find an official car park either. But don’t let that irritate you, we just parked in front of the restaurant O Castro and walked down the trail behind the tourist information which is no longer operating.

There we found the small peninsula with the Castro de Baroña. The 23,000-square-meter Iron Age Celtic settlement with their round house ruins was discovered in 1933 and excavated until 1984. As one of the best preserved Castros of Spain and Portugal, it is protected as a cultural heritage.

Afterwards we drove along the coast and accidentally came across the Ponte Medieval Do Rio Sieira – an ancient bridge. After we passed by the abundant beaches to the Dunas de Corrubedo, we had to realize to our disappointment that the protected giant dune is not allowed to enter. If you want to bathe, you have to go to the beach Praia do Vilar from the southwest.

Therefore, we simply drove on to Ribeira and lay down on the Praia de Coroso. By this, we had already arrived at the Ría de Arousa. With a length of 37 kilometers and a maximum depth of 69 meters, it is not only the largest Ría of the Rías Baixas, but also of Spain as a whole.

After extensive (sun) bathing we drove on. As we were hungry, we had a snack break at a picnic place just before Vilagarcía de Arousa. Then we went to the only 7 square meters small island of A Illa de Arousa, but which – to be honest – we found somewhat disappointing.

We went it once off completely, from the lighthouse Faro de Punta Cabalo in the north to the National Park of Carreirón in the south. This is considered as a special bird sanctuary, among other things because of its gray heron populations, and logically it’s inaccessible to cars, so we followed the sand paths by bike.

Here are hidden quite a few deserted sandy beaches, which didn’t really blow us away though. Many were very rocky, but above all quite swampy and flooded with algae, which is why we decided not to stay there until the next day. So we drove back across the nearly two-kilometer-long bridge to the mainland. Since its completion in 1985, the connection, which is one of the longest bridges in Spain, replaces the crossings and transports with small steamships and thus boosts the local economy.

So the island could at least serve us as a sunset scene. By the way, the European Union has declared it a nature reserve because of its 36 kilometer-long coast (which is supposed to be 11 kilometers of white sand beaches). We have seen better beaches and found A Illa de Arousa rather boring.

The next morning we went straight to Cambados. There, we looked first at the Pazo de Fefiñáns and the Igrexa de San Bieito. Then we drove to the ruins of the church of Santa Mariña Dozo. There is also the ascent to the Mirador de A Pastora, a beautiful viewpoint overlooking Cambados and the Ría de Arousa.

Before we left, we made a quick detour to the Isla de San Sadurniño with the Torre San Sadurniño, but which, as you can see in the photo, is also a ruin. In contrast to the Mirador de A Pastora one must not necessarily have seen this tiny island.

After Cambados we drove to Pontevedra and thereby arrived at the Ría de Pontevedra. We stayed there all day and took a look at the city. According to legend, Pontevedra was founded by Teukros, a Greek hero of the Trojan War, around 1200 AD.

On the other hand, historically documented is the presence of the Romans , so that it can be assumed that the city has emerged from a Roman settlement. The Romans called the settlement Ad Duos Pontes (“To the Two Bridges”) and later Pontis Veteris ( “Old Bridge”), resulting in Pontevedra.

We started our sightseeing tour in the heart of Pontevedra at Praza da Peregrina. There, the Capela da Virxe Peregrina ( “Chapel of the virgin pilgrim”) is situated, which symbolizes the close connection of the city with the James cult. The church of the patron saint of this town is an original construction of the late 18th century and has a round floor plan, similar to a shell.

Then we went to the Convento de San Francisco, in front of which is the fountain Ferrería. Millions of pilgrims refresh themselves in this fountain, for whom Pontevedra as the capital of the Portuguese Way of St. James (from Lisbon to Santiago de Compostela) is a mandatory stage goal. Then we went to Praza da Pedreira with the Pazo Mugartegui.

And then finally to Praza Da Leña, a small square where’s a lot of hustle and bustle. It is considered one of the most beautiful places in Pontevedra. In the middle a Cruceiro, a typical Galician stone wayside cross, is placed. In the upper floors of the 18th century houses, the glazed galleries give a clear view of the square, while the arcades offer protection from a sudden cloudburst. We also paid a visit to Praza da Verdura.

After seeing also the city hall and the Pazo Provincial, the Basílica de Santa María a Maior was the culmination. The church with a magnificent portal is considered a typical example of Galician Gothic.

Overall, we liked Pontevedra very well with its beautiful old town and the many parks. Since we had caught a particularly warm day, we were glad about the many trees that offered us shade.

The next day we drove to the viewpoint O Facho de Donón at the tip of the O Morrazo peninsula. From here, when the weather is clear, one can even recognize the Illas Cíes, a small group of islands which are considered the “islands of the Gods” since ancient times.

The three small islands were declared a nature reserve in 1980 and have been part of the national park Islas Atlánticas de Galicia since 2002. The 1,200-meter-long beach Playa de Rodas, which connects the islands of Do Faro and Monteagudo, was stated the best beach in the world by the British daily newspaper The Guardian in February 2007.

We do not recommend a drive by car to the two lighthouses Faro de Cabo Home and Faro de Punta Subrido, since it is a one-way dirt road and the repeatedly signposted parking actually never shows up. So make this trip better on foot or by bike. Since we needed a little cooling down, we went to the beach and, by doing so, reached already the southernmost of the four Rias Baixas. Here you have the choice between the nudist beach Praia de Barra and the textile beach Praia de Viñó, which merges eastwards into Praia de Nerga.

We chose the Praia de Viñó, for which one you decide, of course, is left to you. 😉 The three beaches are directly next to each other and are all paradisiacal. The crystal clear water is ideal for swimming. Unfortunately, we have no photos, as we did not want to take any technology with us to the beach.

After that we made a “Mirador hopping”. Thereof particularly recommendable are the viewpoints Balcón do Rei near Cangas and Campo da Rata in Redondela. From the Balcón do Rei (“Balcony of the King”) you have a beautiful view of Vigo. Besides, it seems to be an insider tip, as we were all alone up there.

Whereas the Mirador del Campo da Rata is overrun with people. The reason: the “best bank in the world”, known as mejor banco del mundo. The strange thing: No one knows who has put it there and why. It is only certain that it must have happened in 2015. And that the location is not randomly chosen: on the rocks of the Mirador del Campo da Rata, which already offers a breathtaking view of the Ponte de Rande and the entire Ría de Vigo.

Thus, no wonder that even lines are formed here to get a picture of oneself on the popular bench. And yet, this highlight is worth it: Even if you do not want to wait for a free space, it is just amazing fun to climb on the rocks or just enjoy the view. Definitely a very special place!

We went on to Vigo, where we stayed for a few days. Our favorite place? Clearly the Castelo do Castro and its park. There you can relax not only super-well, but also have a really good view over Vigo, the Ría and the opposite coast, which is especially nicely illuminated at night.

But also the beach Praia de Samil knows to convince. Too bad that the many public pools are only accessible for children up to 12 years. Otherwise, that would have been the highlight! Although it was a bit too cold for swimming anyway.

Apart from that, the port, industrial and university city doesn’t have much to offer for tourists in our opinon. Unfortunately, Vigo still has a zoo, but luckily it is the only one in Galicia.

That was then the last Ría of the Rías Baixas and our penultimate city in Galicia as well as in Northern Spain. Three guesses which country comes next! 😛