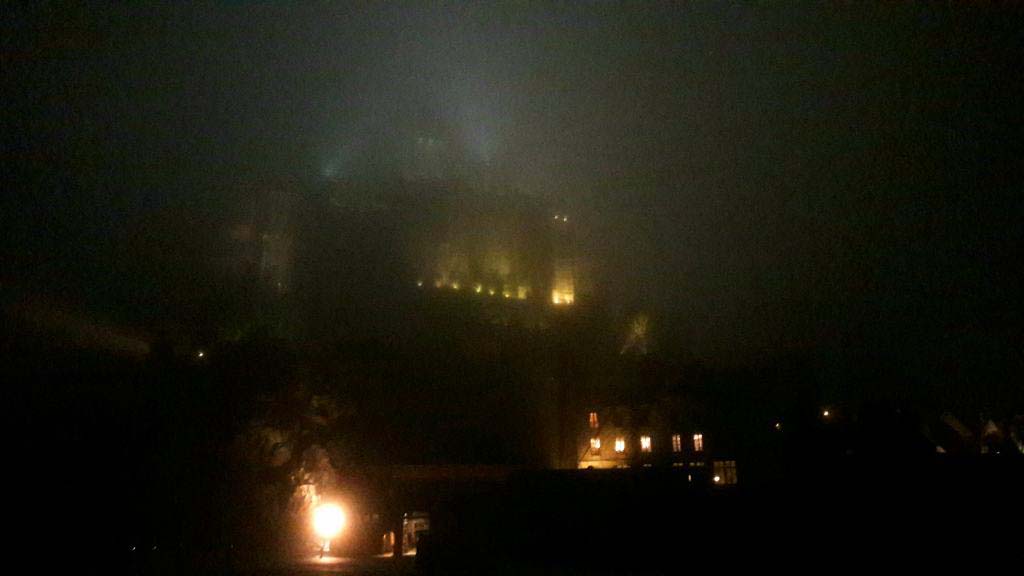 A rock protruding from the sea not far off the coast. On it and seemingly merged with it an almost as large abbey. The most visited natural monument of France and UNESCO World Heritage Site. Annually visited by about 3.5 million people. And now also by us. After a very complicated swimming pool search (actually who comes up with these opening times and regulations in France?!) and a refreshing shower, unfortunately we arrived only at twilight at the Mont-Saint-Michel. Through the dense fog we could hardly see anything anyway. The countless visitor parking spaces were deserted and we didn’t meet any cars or people either.

This together caused a spooky and somewhat eerie atmosphere. So for starters we drove to the German Soldiers’ Cemetery, where else. I could hardly have imagined a more comfortable place under this condition. Not.

After Ron had taken a look at it (while I waited in the car), we parked the car in the parking lot of a closed restaurant and detached the bicycles. With these we set out to ride the last two kilometers to the Mont as this area is closed off and only accessible for cars from hotel or restaurant guests. There we met again people who were having dinner.

Across the bridge over the dam built in 1879 we came to the Mont, which was only visible when we were already close to it. We got off the bikes and climbed up the path on foot. But as you probably can imagine, we did not have good views at all. That’s why we let it rest, rode back to the car and put us to sleep in a public car park in the nearby Pontorson.

The next morning we visited the Mont Saint Michel again. It still was very foggy but sunny. In between, the island showed itself every now and then for about two milliseconds, only to disappear then again in the fog.

The very obvious off-season, however, also had advantages for us: so we were spared throng like this. During our whole visit, we met maybe five people. This might have also been due to the time: We were uo so early (between seven and eight o’clock), that the Abbey was not even open yet. Back down, we namely met the first travel groups, which had come with the free shuttle from the parking lot.

According to the legend, the archangel Michael appeared to the bishop Aubert of Avranches and instructed him to build a church on the rocky island, but the bishop did not follow the multiply repeated demand until the angel burned a hole into his skull with his finger (The skull of Aubert with the hole is kept in the church of Saint-Gervais in Avranches; but in truth it probably is a trephined skull from the Middle Ages.) In the period 708/709 Saint Aubert built a first sanctuary in honor of St. Michael. (If you only think “Yeah right, what else!”: Jupp, this is what we thought, too.)

Le Mont Saint-Michel is definitely worth a visit! Even in bad weather conditions, there’s something mystical and magical about the rocky island with its abbey. The entrance reminds of a constructed gate from a theme park. The geographical location and the medieval flair make the monastery a world-wide unique sight, incomparable with anyhing we have seen so far.