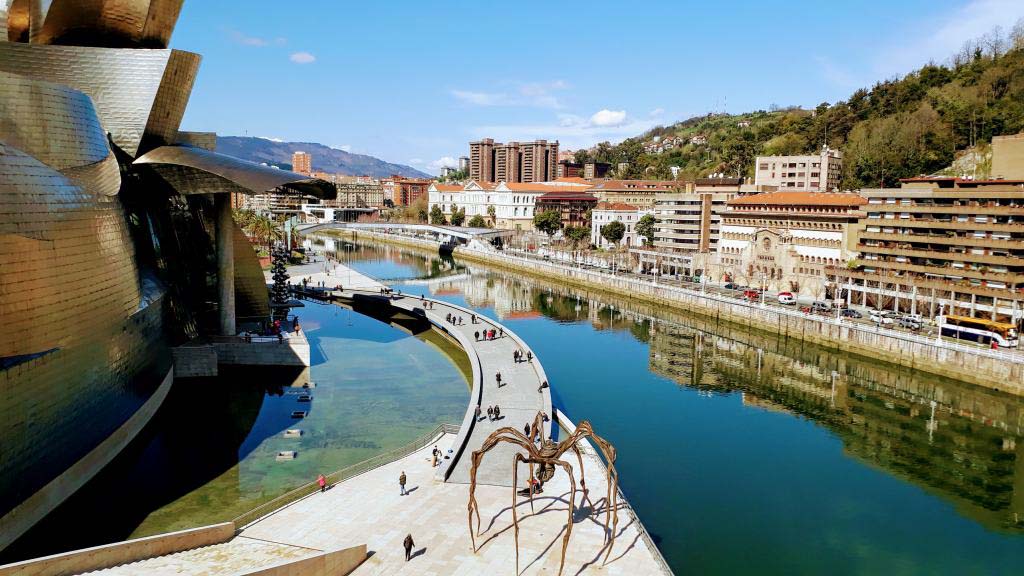 As the largest city and industrial center of the Basque country, Bilbao is known primarily for one thing: the Guggenheim Museum. What else to see, to do and to eat and what the so-called Bilbao effect is, you will learn here.

To our video of Bilbao

Futuristic, bizarre, not of this world, shiny silvery and organically playful, imposing, extraordinary and extravagant, made of limestone, glass and titanium: Almost everyone has probably already seen the Guggenheim Museum – even if only in photos. The landmark of Bilbao was designed by the Canadian-American architect and designer Frank O. Gehry and completed in October 1997 after four years of construction. Over 19 million art lovers from all over the world have visited it since then.

One of the 19 galleries is a particularly spectacular one: the exhibition area for oversized works – a 30-meter-wide and 130-meter-long (longer than a football field!) hall without pillars. The total exhibition area is 11,000 square meters.

In front of the museum is the floral sculpture Puppy by the American artist Jeff Koons, which was supposed to be there only during the opening year, but then remained after protests by the population. Every spring, it is replanted with flowers and enjoys great popularity still today.

However, the art gallery was not always celebrated as this year on the occasion of the 20th anniversary: during the construction work there was resistance from the population, mainly because of the high costs of around 100 million euros.

Nowadays the deconstructivist building, which is reminiscent of a spaceship, is one of the most important tourist attractions in the region, bringing the industrial city an additional million visitors per year. And this is exactly what the Bilbao effect describes: the targeted upgrading of places through spectacular buildings by architects. The architect himself once said: “The museum world thinks, I deliberately create oblique exhibition rooms to make it difficult for the artists, but that is not true. I just do not like these white shoe boxes. Neutrality is not neutral, it degrades art. ”

We also had the Guggenheim Museum in mind when we headed to Bilbao. Therefore we unfortunately had informed us too little about the Puente de Vizcaya, also called Puente Colgante, inaugurated in 1893 and designed by Alberto Palacio, one of Gustave Eiffel’s disciples. It is the world’s oldest transporter bridge and one of the few that still exists at all. Since 2006, it has been a UNESCO World Heritage site.

If we had known this before, we would definitely have had a ride in the cabin for 40 cents. So make it better than us and always stay informed by reading our blog! 😉

Also worth seeing is the “White Bridge” Zubizuri, whose glass floor has now been covered with a carpet due to the danger of slipping in the wet; La Plaza (Mercado de la Ribera), the largest covered market hall in Europe; the Plaza Berria (Plaza Nueva), a very lively square from the middle of the 19th century and the old town Casco Viejo, also called Alde Zaharra, which includes not only the Siete Calles (“seven streets”) under whose name it is also known.

Funfact: In the Txakur Kalea (“dog street”) there is a fountain, whose taps represent lion heads. Now the Bilbaínos, however, at the sight of these are said to have called out “These are not lions, but dogs!” Therefore, the name of the street.

Since the traditional Basque cuisine is rather less vegan-friendly, we decided to visit Txarloska, an all vegan pastry shop. With the large selection of pies, cupcakes, cookies, brownies and other treats we felt like in heaven. Among other things, a gluten- and sugar-free chocolate cheesecake, what else could you ask for?!

By the way, the name comes from one of their cakes: the typical Polish Txarloska with apple, semolina and cinnamon.