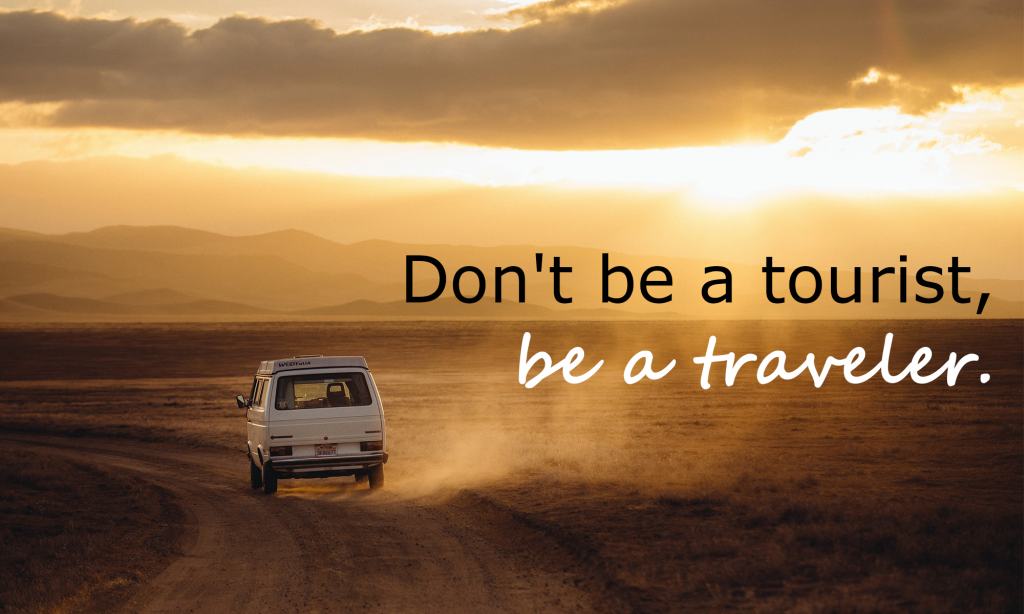 Since a few people pointed out to us that “travelers” should be written with double “l”, here is a brief explanation.

Ironically, all of these people so far were German speaking and not native English speakers. Therefore it can probably be assumed that this error is due to the strong UK-style English lessons at German schools. Yes, “travellers” actually is written with two “l” in British spelling – in the American however not. And yes, we adapt ourselves to American English: We write “color”, “theater” and “cookie” – not “colour”, “theatre” and “biscuit”.

Nevertheless, of course we have thought about that when choosing our name. Naturally, we want to feel comfortable with the English that we write, and it’s quite logical that we prefer the linguistic variation, which we also use in spoken conversation. And we just don’t speak with a British accent, not to mention all the strange words. (Seriously, who actually calls a “zucchini” “courgette“? 😛 Although we have to admit that “lorry” sounds a lot cuter than “truck” and “telly” as “TV” or “ice lolly” as “popsicle” and “loo” instead of “toilet”, but we’re simply not talking to babies. And why would you call an “airplane” “aeroplane” when you say “air” and not “aero”?)

Almost as important to us, however, is to reach as many people as possible. That’s why we looked at the Google Trends: While “traveler” and “traveller” provide a neck-and-neck race, when it comes to “travelers” vs. “travellers” and “traveling” vs. “travelling” the American version is clearly ahead.


Of course, we are also interested in the countries from which these search queries are made.


According to Google, the bulk of the queries with the British spelling comes – not very surprisingly – from Europe and the former British colonies Australia, New Zealand, India, Thailand and South Africa (and: Saudi Arabia, presumably because of the British universities). Whereas those who prefer “travelers” to “travellers” are, logically, the US, most countries of South and Central America and Eastern Europe, China, the Philippines and Indonesia. In Canada, Egypt and Russia it’s balanced. However, the interesting part: In the linguistically predominantly British-influenced countries there are still more queries with American spelling than vice versa.

We also get significantly more results for a Google Germany search for “traveler” than for “traveller”.

This is not surprising at all, since according to Wikipedia, the American English with well over 200 million native speakers is the most popular variety of English.

As mentioned above, we just feel more comfortable with the American spelling. And even though we sometimes use British vocabulary on our blog – whether it’s for more diversity, by mistake (after all, we’ve learned British English at school, too), or because we simply find it more appropriate, e.g. in case of the ice cream van in Bruges (in American English it would actually be an “ice cream truck”, which we rather attribute to the type of vehicle to be found there and we considered the ice cream cart photographed by us more like a “van” than a “truck”) – we find that at least the spelling should be uniform (in our case, American). And therefore we believe that our name spelling should also be consistent with the rest of the content.