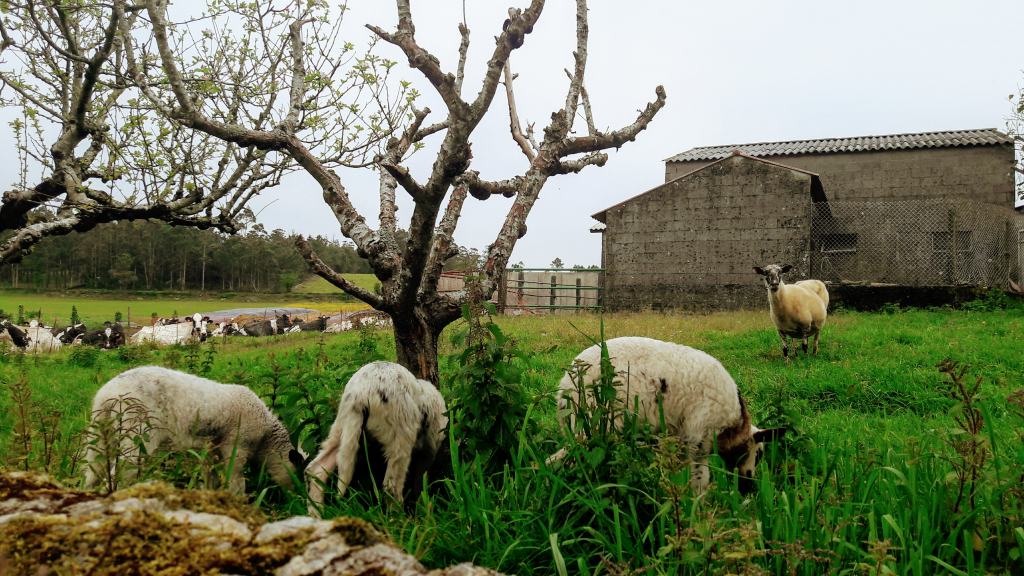 The “Coast of Death” Costa da Morte got its name because of the difficult conditions for navigation and the resulting shipwrecks and deaths. It is the most western coastal section of Spain. For this reason, in the Roman and pre-Roman legends, it is regarded as the “end of the world”, from which the name of Cape Finisterre derives.

After leaving the beautiful A Coruña, which has become a new favorite city for us, we headed further towards Costa da Morte and there first of all to Muxía. As you can see from the photos, the weather unfortunately was not that good during our two-day trip. But well, maybe that emphasizes the drama and authenticity of the place. 😉

November of 2002: Sinking of the oil tanker Prestige off the coast of Muxía, the consequences of the oil spill caused by could not be completely eliminated until today. December of 2013: Fire after a lightning strike during the Christmas windstorm, which destroyed the roof timbering and a part of the pilgrimage church A Virxe da Barca.

The coastal town of Muxía (Spanish Mugía) is not exactly known for great luck. Nevertheless, the church A Virxe da Barca is one of the most important pilgrimage sites in Galicia and a destination for many pilgrims after reaching Santiago de Compostela.

2. Stop – Fisterra: The End of the World Historically the Cape Finisterre (Spanish Cabo de Finisterre, Galician Cabo Fisterra, both derived from Latin finis terrae “end of the earth”) was held for the western end of the world. Although it is not the westernmost point of mainland Europe (which is namely the Cabo da Roca in Portugal) and not even of the Spanish mainland (which is located 15 kilometers north at the Cabo Touriñán).

Instead it is considered as the “actual end of the Way of St. James”. Many pilgrims continue their journey from Santiago de Compostela via the Camino a Fisterra to the Cape or visit it after the end of their pilgrimage by bus. However, only those who have traveled the distance from Santiago to Fisterra on foot or by bicycle are admitted to the Fisterra pilgrimage center.

By a price error on Airbnb, we got a cheap night at Casa Castineira (get 15 € back here). This converted farmhouse from the 19th century has a large garden, a lounge and dining area with open fireplace and spacious rooms. In the surroundings we took a look at Cee and Sardiñeiro de Abaixo.

The next day we went on to the waterfall Cascada de Ézaro (Spanish) or Fervenza do Ézaro (Galician). The height difference of the last stretch of the river Xallas from the sea is 155 meters, so that the water falls up to 40 meters deep down the mountains just to meet the canyon walls at the foot of Mount Pindo (630 meters high).

Afterwards we drove up to the viewpoint Miradouro do Ézaro, from which you can see only a part of the waterfall, but above all get a nice “overview” over the coast. There are also some picnic tables on the platform, but the strong wind up there does not really invite you to stay long.

Carnota is famous for its Hórreo, a Spanish national monument. A Hórreo is a traditional storage facility for field crops (e. g. maize). In the function it corresponds to the Bavarian-Austrian granary.

This Hórreo de Carnota was begun in 1768 and reached its present size in 1783. It consists entirely of granite and has a length of about 35 meters. It is known as the largest Hórreo of Galicia, although the Hórreo in the neighboring Lira may be a few centimeters longer. However, it is worse preserved than the Hórreo de Carnota.

The lagoon of Louro is not worthwhile in our opinion, since you can neither get there well nor lie down well. Instead, we would rather recommend going to the dunes behind or to the Praia de San Francisco beach.

After our little trip to the Costa da Morte we drove on to Santiago de Compostela.