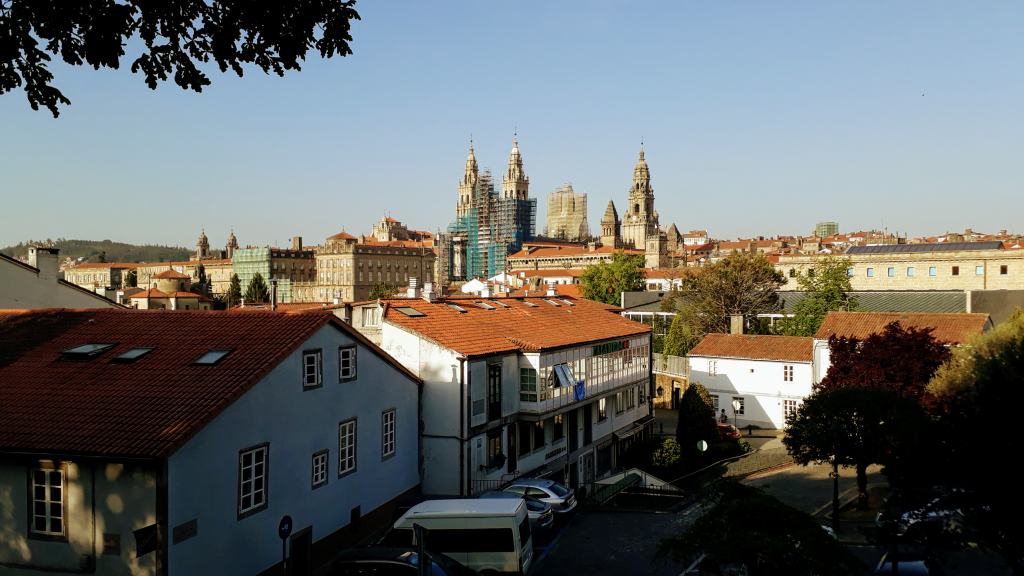 As the destination of the Camino de Santiago (Way of St. James), Santiago de Compostela is renowned worldwide. This became the first European cultural trail in 1987, two years after the pilgrimage site was declared a World Cultural Heritage by UNESCO. In 2000, Santiago was also European Capital of Culture.

Our video of Santiago de Compostela

When we arrived in the capital of Galicia, we were plagued by a small hunger, so we first cycled to Alice in WonderPie. And yes, the vegan-friendly bakery is just as enchanting as its name sounds. In addition to vegan pies, brownies, croissants and cupcakes, you can get also savory things, such as vegan pizza. For all coffee specialties, of course there is also plant milk available. We cannot recommend this warm bakery highly enough.

Afterwards, we took a look at Santiago as we walked around the city aimlessly. However, we came across the cathedral quite quickly, as it is the central point of the old town, which is quite small anyway. The facade of the cathedral is, incidentally, depicted on the Spanish one-, two- and five-cent coins.

Before taking a closer look, we first visited the Museo das Peregrinacións e de Santiago, which offers fascinating insights into the phenomenon of Santiago over the centuries. From the window on the 3rd floor one has a great view of the Praza the Praterías and some towers of the cathedral. The best thing about the museum: Admission is free!

To the left of the entrance are a few computers available. The installed video game puts one as pilgrims into the medieval Santiago de Compostela. Sure, the graphics, control and story can not keep up with current games. But you can learn something here and hey, never look a gift horse in the mouth! 😛

We saw a group of people demonstrating on the steps of the highly symbolic Praza da Quintana in front of the cathedral. They sang and held the flag of Venezuela and signs saying “no + dictadura“. This means “no more dictatorship” and is aimed against the government of President Nicolás Maduro, who had temporarily ousted the Parliament from power.

Since then, the protests have become a mass movement: On April 19, a holiday in Venezuela, which marks the prelude to the Revolution of 1810, millions of people went to the streets of the Venezuelan capital Caracas. They blame Maduro for the severe political and economic crisis and call for new elections.

Fittingly, the monument to the Camino de los Derechos Humanos is located on the same square in front of the Instituto Europeo Campus Stellae. The “Route of Human Rights” project was presented on 12 September 2016 and consists of 30 panels reflecting all the articles of the Universal Declaration of Human Rights. These are placed along the Camino Primitivo, the original Way of St. James from Oviedo to Santiago.

We started the next day in the purely vegan health food store Herbas Tenda Vegana. In addition to the food and non-food items of well-known brands (partly also from Germany), there are some local and regional specialties as well, such as the “Calabizo”, a vegan chorizo (Spanish sausage with peppers and garlic) consisting mainly of pumpkin (Spanish calabazo, hence the name). Or the Mermelada de Pimientos, a marmalade from green peppers, available in the varieties picante (spicy) and dulce (sweet).

Then we went again back and forth through the old town until the hunger was announcing himself again and we stopped off at the SCQ café. The café also serves as a bar and venue for live music and other events. The many vegan options are marked in the menu (as well as all allergens) and include, among others, fajitas, burgers, salads, arepas (round cornbreads) and sweets. There are also smoothies and shakes with plant milk.

After we had feasted extensively, we went to the Parque da Alameda. There we relaxed a bit and enjoyed the view from the Xardíns da Ferradura to the Estatua de Rosalía de Castro. Rosalía de Castro was a poet from Santiago de Compostela who contributed to the revaluation of the Galician language with her works.

Afterwards, we tried to get a closer look at the sights of Santiago, but found that we had already been in most places. Nevertheless, we walked the purple route of the city map from the Oficina de Turismo once completely. If you want to make sure to have seen everything in the old town, this is a reasonable approach. Otherwise, an aimless wandering around should also serve the cause.

When our feet began to hurt, we went by bike again into the Parque da Alameda. This time, however, we went up the path parallel to the Rúa do Pombal, so that we had a wonderful view of the Cathedral of Santiago.

When it was getting dark, we headed to our dinner, which we got in the purely vegan Entre Pedras. The fact that the restaurant is popular not only among vegans, turned out soon, as it was getting busier until its capacity was exhausted. So if you want to eat here at peak times, a reservation in advance is recommended.

But yet, the casual, familial restaurant lives up to its obvious excellent reputation: We would have liked to order the whole menu up and down, because our food was so incredibly good. And all that at an unbeatable price-performance ratio. Entre Pedras, you most certainly haven’t seen us for the last time! 😉

Well, and that were already our little more than 24 hours in Santiago de Compostela, where we feel like we have seen every alley and so many pilgrims as never before in our lives. To sleep we namely drove already further to Noia, located about 30 kilometers east. Because even though we liked you, Santiago, we still prefer being at the sea. And yet we will definitely come back! 🙂