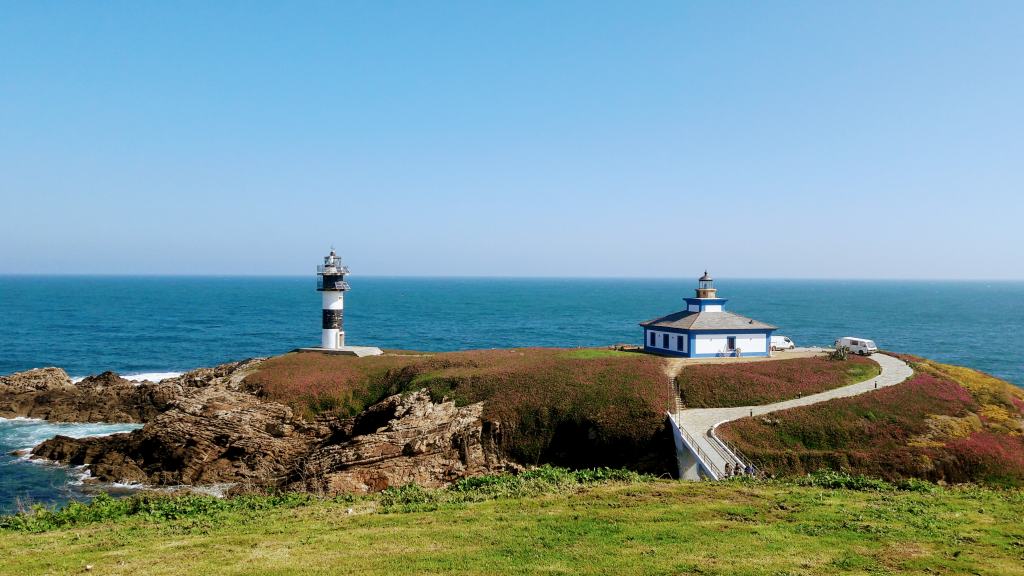 Our first stop in Galicia is located on the western bank of the River Eo, which separates Galicia and Asturias from each other. The port town of Ribadeo is thus the most northeastern municipality of the autonomous community. Ribadeo is particularly known for the Praia das Catedrais, which causes such a high number of visitors, that one has to register online in order to visit it.

Our video of Ribadeo

In Ribadeo we drove first to Illa Pancha, a small island in the west of the estuary, which is connected by a narrow bridge to the mainland. There are two lighthouses: the old Faro from 1857 and the new one from the last quarter of the 20th century in the north of the island.

Afterwards, we were sunbathing on the Praia dos Bloques, a city beach of Ribadeo, where we were all alone despite the high temperatures. The sandy beach in the south of the port of Mirasol, which is only 120 meters long and 25 meters wide, does not have a Blue Flag despite the calm waters and the extensive facilities (paper baskets, showers, toilets, parking lot, green space, etc.).

Just south of the fortress Forte de San Damián is the ethnographic park O Cargadoiro, the remains of an old commercial loading bay, where trains unloaded their cargo. A crane removed the cargo from the train and placed it onto the waiting ships below. This made the trading process easier for larger ships, as they no longer had to enter the estuary or wait for the tide.

From 1927, the railway was used for passenger transport, until it was finally dismantled in 1966. Today there is a footbridge at this point, which is popular because of its beautiful scenery as a “selfie spot”. From here you also have a good view of the Ponte dos Santos, which connects the shores of Galicia and Asturias.

Then we went into the old town, which is concentrated around the Praza España. Here, next to the parish church of Santa María do Campo, which emerged from a Franciscan monastery in 1835, is the most representative building of Ribadeo: the Torre dos Moreno, a typical Indian house construction designed by the architect Julian Garcia Nunez and the engineer Engel Ardex, and built in 1915 in the eclectic style. The modernist building made of concrete and iron has been a cultural asset since 1997.

We got a vegan dinner at Amodiño. The bar with an integrated shop attaches great importance to ecological, healthy and natural foods and thus focuses on regional organic products and fair trade. These can be bought to take away or you can try them on the spot in the small restaurant. Not only vegetarians and vegans get their money’s worth, but also people affected by celiac disease.

Another highlight is located ten kilometers west of the town center of Ribadeo: the Praia de Augas Santas, better known as Praia das Catedrais. The beach was given this touristic name because of its extraordinary natural rock formations resembling the soaring arches found in Gothic cathedrals. It is accordingly crowded: Every day, up to 20,000 people visited the barely one kilometer long, fine sand beach.

Since environmentalists have long warned against the consequences of the many visitors for flora and fauna, a maximum of 4812 people per day have been allowed since summer 2015, after a two-kilometer long line of people had formed at Easter. This number of visitors is considered “sustainable”. For the high season during the Easter week Semana Santa and between July 1st and September 30th of each year, you have to reserve a free access authorization online (maximum 90 days in advance).

This still quite new regulation is controversial among the residents. The restriction disrupts some, others see themselves barely affected, since around Ribadeo all the beaches are beautiful and much more suitable for bathing. Which we see similar: This special beach is definitely worth seeing. For swimming and sunbathing, however, we prefer beaches with fewer crowds of tourists.