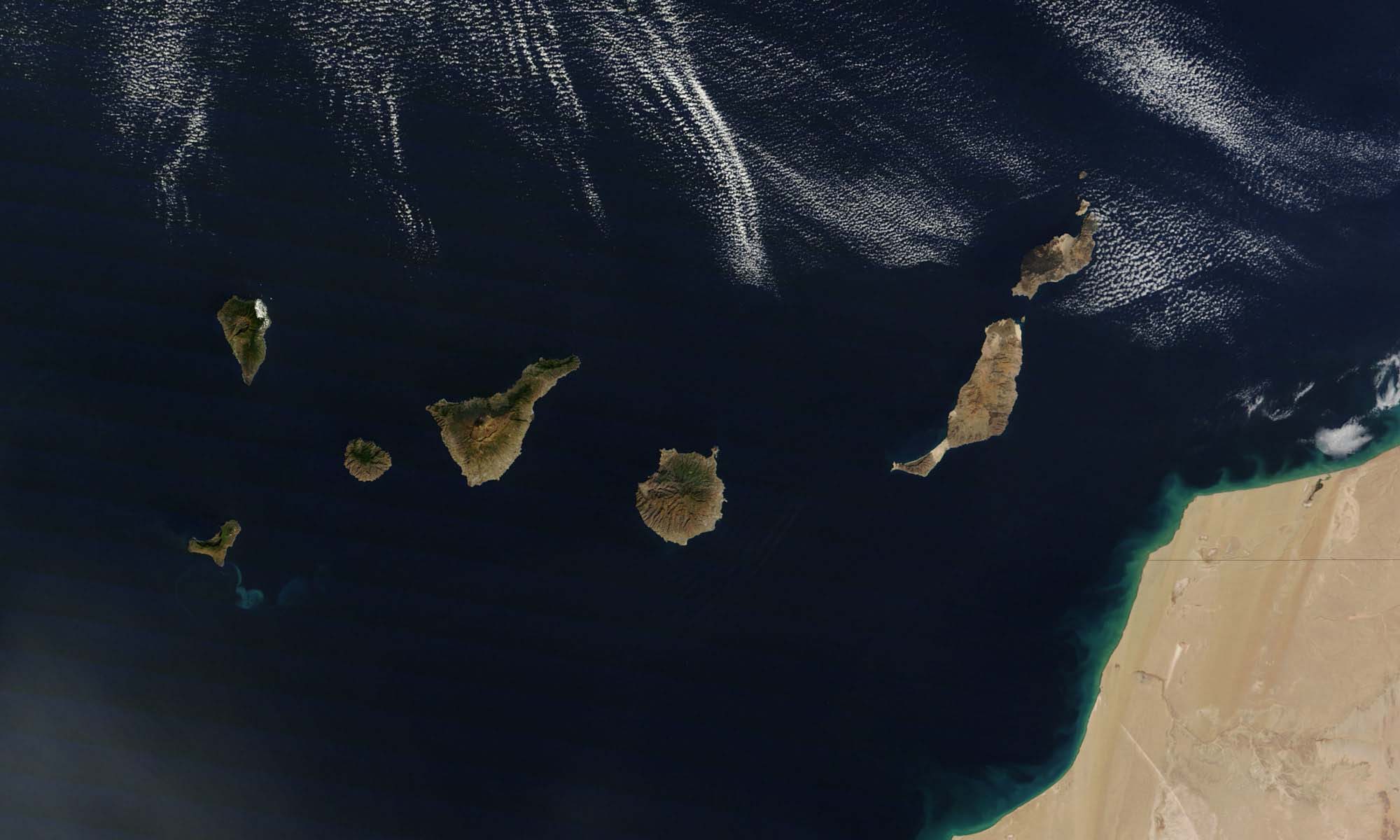 The Canary Islands, also known as the Islands of Eternal Spring due to their year-round mild climate, are among the most popular holiday destinations in the world. However, apart from the weather and their volcanic origin, they have little in common, because each of them has its own charm. As much as the islands differ from one another, the more diversified is it to visit them all. For those who don’t have that much time, here’s a comparison.

The Canaries are composed of the seven main islands with their own island administration (Tenerife, Fuerteventura, Gran Canaria, Lanzarote, La Palma, La Gomera and El Hierro), another inhabited island (La Graciosa) and five uninhabited islands. Politically they belong to Spain, geologically to Africa and biogeographically to Macaronesia. 2,108,121 people live on the islands of volcanic origin. In addition, the largest canary island of Tenerife houses the 3718 meter high Pico del Teide, which is not only the highest mountain in the Canary Islands, but also the highest peak in Spain.

The emergence of the Canary Islands dates back to a series of submarine eruptions 36 million years ago and has gone through four phases. Each island has its own history. Only Lanzarote and Fuerteventura have undergone a similar geological history. For thousands of years, they were connected during the low water level in the cold periods to a single island and even today they are separated by an only about 40 meters deep and about 10 kilometers wide strait.

Tenerife – the Versatile One

Tenerife is not only the largest Canary Island, but with about 888,000 inhabitants also the most populated island of Spain. With its modern capital Santa Cruz de Tenerife, the UNESCO protected Teide National Park, the mountains of Teno and Anaga, the touristy south, natural and artificial sea water swimming pools, many small and large towns and a lot of sandy beaches, in our opinion it is also the most versatile the Canary Islands. Thanks to a variety of official hiking routes, it is also great for walking, hiking and climbing.

The Main Sights in Tenerife

Our Blog Posts about Tenerife

Pico del Teide: At the Highest Peak in Spain

How do I get to Tenerife?

Fuerteventura – the Sandy One

With almost 1700 square kilometers of island area Fuerteventura is the second largest of the Canary Islands in terms of area, however, it is only sparsely populated. Here you will find mainly sandy beaches and the Parque Natural de Corralejo under nature protection with large shifting dunes. In addition, there is almost always a strong wind blowing. The oldest island in the Canary archipelago is therefore particularly popular with surfers on the west coast, windsurfers in the north and kitesurfers on the east coast.

The Main Sights in Fuerteventura

Our Blog Posts about Fuerteventura

How do I get to Fuerteventura?

Just south of the capital Puerto del Rosario is the international Fuerteventura Airport (FUE). There are both scheduled and charter flights to many countries in Europe as well as regional planes to the neighboring islands.

Gran Canaria – the Vibrant One

The party island Gran Canaria is not only popular with all-inclusive holidaymakers and nature lovers, after all, it’s considered to be especially LGBT-friendly. In the north is the capital Las Palmas de Gran Canaria, the largest city in the Canary Islands. The western half of the island is home to a UNESCO Biosphere Reserve. In the center of the canary island is the landmark of Gran Canaria: the 1813 meter high “Wolkenfels” Roque Nublo. Also very well known are the dunes of Maspalomas on the southern tip of the island. A little further west there is another famous place: Puerto de Mogán, which is also called the “Venice of the South” because of the canals from the port into the village and the many small alleys.

The Main Sights in Gran Canaria

Our Blog Posts about Gran Canaria

How do I get to Gran Canaria?

From Puerto de la Luz in Las Palmas there are ferry services to Tenerife, Fuerteventura, Lanzarote and La Palma as well as to Huelva on the Spanish mainland.

Lanzarote – the Artistic One

The northeasternmost of the seven major Canary Islands is mainly known as the home of the artist and environmentalist César Manrique, who lived from 1919 to 1992 on the canary island and contributed significantly to its design. Manrique’s aesthetic ideology, the harmony between nature and artistic creation, is reflected in each of his diverse works. In addition, the UNESCO declared Lanzarote and its volcanic landscape as the first whole island a Biosphere Reserve in 1993.

The Main Sights in Lanzarote

Our Blog Posts about Lanzarote

How do I get to Lanzarote?

Near the capital of Arrecife is the international Lanzarote Airport (ACE), which represents the main traffic connection of the island.

From the port of Puerto de Arrecife there are ferry lines to Gran Canaria, Tenerife, La Palma and Cádiz on the Spanish mainland. There are also daily ferries between Corralejo on the neighboring island of Fuerteventura and Playa Blanca and Puerto del Carmen in southern Lanzarote.

La Palma – the Green One

With 40 percent forest cover, La Palma is the most densely wooded of the Canary Islands. It is therefore also called “La Isla Verde” (“the green island”) or “La Isla Bonita” (“the beautiful island”). It is also one of the geologically youngest islands in the Canaries: its volcanic activity can still be seen in many craters and lava flows along the volcanic route on Cumbre Vieja and the large crater of the Caldera de Taburiente. Since the third smallest canary island has largely been spared mass tourism, many places on the island have retained their original character. Due to its many hiking opportunities, it is perfect for nature lovers – and also for the ones interested in astronomy, because here you’ll find the largest reflector telescope in the world.

The Main Sights in La Palma

Our video of La Palma

Our Blog Posts about La Palma

How do I get to La Palma?

Several ferry companies run between Los Christianos in the south of Tenerife and Santa Cruz de La Palma, some with a stopover in La Gomera. There is also a connection to Gran Canaria and Lanzarote as well as Cádiz on the Spanish mainland.

La Gomera – the Alternative One

The volcanic origin of the second smallest of the Canary Islands is still very visible. The closely spaced volcanic vents and the largest coherent laurel forest in the world belong to the Garajonay National Park, which is part of the UNESCO World Natural Heritage. It is named after the Garajonay, which is the highest point of the island at 1487 meters. The peculiarities of La Gomera include the whistling language of the Gomeros, El Silbo, which exists only here worldwide and is said to have been used by the indigenous peoples for communication over long distances. It is on the list of protected World Cultural Heritage of UNESCO. The most famous valley of the island is the Valle Gran Rey, home to hippie communities for many years and dropouts still today. An extensive network of mainly signposted hiking trails connects all parts of the island.

The Main Sights in La Gomera

Our video of La Gomera

Our Blog Posts about La Gomera

7 Places on La Gomera You Must Have Seen

How do I get to La Gomera?

The La Gomera Airport (GMZ) is located at Playa Santiago in the municipality Alajeró. The runway is too short for international charter aircraft, so the airport only serves regional traffic. There are regular connections to all other Canary Islands as well as some other destinations such as Madeira, Cape Verde and Morocco.

La Gomera can be reached by ferry from Los Cristianos in the south of Tenerife. The harbors on La Gomera are Valle Gran Rey and the port of the island’s capital, San Sebastián de La Gomera.

El Hierro – the Unknown One

El Hierro is the only one of the seven main islands that we haven’t visit yet, so unfortunately we can not show you any pictures. It accounts for only 3.5 percent of the land area of the Canary Islands, making it the second smallest inhabited Canary Island after La Graciosa near Lanzarote. With about 1.2 million years, it is also the youngest of the volcanic islands. El Hierro was declared an UNESCO Biosphere Reserve in 2000 and in 2014 received the “Geopark” award from UNESCO. The island capital Valverde has nearly 5000 inhabitants, which represents almost half of the total population of the small Atlantic island. Due to lack of direct accessibility and not too many classic beaches spurned by mass tourism, the island is definitely a destination for explorers and nature lovers.

The Main Sights in El Hierro

How do I get to El Hierro?

About 7 kilometers from the island’s capital Valverde is located on the east coast of El Hierro the main island port Puerto de La Estaca. From here there are regular ferry services to Los Cristianos in the southwest of Tenerife.

As you read, each of the Canary Islands has its advantages and peculiarities. Therefore, a general answer to the question “Which Canary Island is the best?” is hardly possible. One thing is for sure: There is something for everyone! We highly recommend you to visit them all. Each island is accessible by plane, ferry and car ferry. If you have any further tips or know other sights in the Canary Islands, please let us know in the comments.

One Reply to “Canaries Guide: Which Canary Island is the Best?”