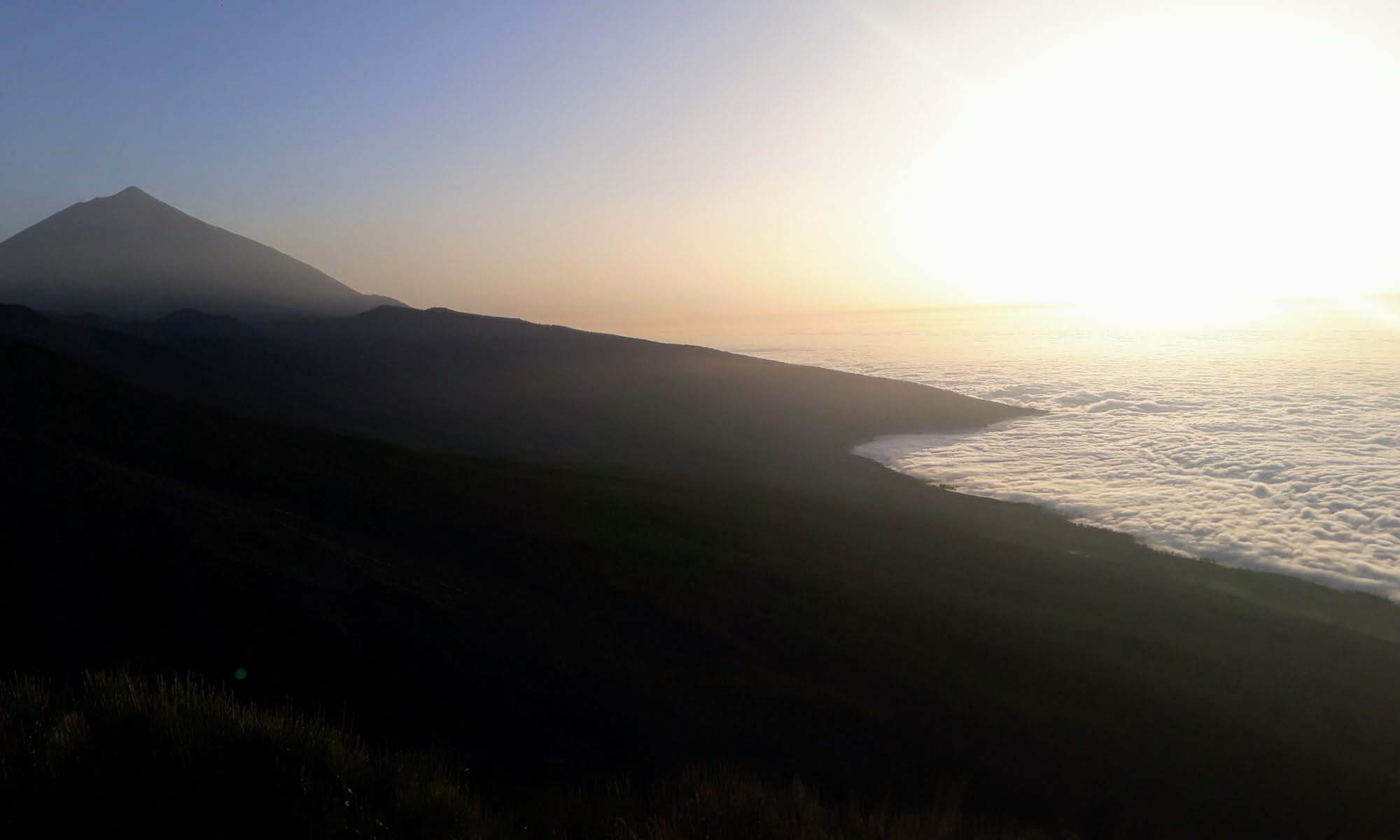 It sticks up far above the cloud cover: the volcano Pico del Teide on Tenerife. With a summit elevation of 3718 meters above sea level, it is the highest mountain in Spanish territory. Moreover, it is also the namesake of the largest and oldest protected area of its kind in the Canary Islands: The Parque Nacional del Teide or Teide National Park was established in 1954 and  declared a UNESCO World Heritage Site in 2007. We were at the top of the Teide and tell you what to pay attention to.

It is believed that the volcano that once towered here was much larger than the Teide, which now rises in the middle of the caldera. After the probably multi-phase collapse of the former volcano, new volcanoes were formed in the same place in the course of time, including, besides the Pico del Teide, the Pico Viejo and the Montaña Blanca. The Pico-Viejo-Teide complex is a stratovolcano formed by the accumulation of material from successive eruptions.

From the bottom of the ocean, Mount Teide today measures 7500 meters, making it – after the two Hawaiian volcanoes Mauna Ioa and Mauna Kea – the third highest and one of the largest volcanic structures in the world. No wonder that the mostly snow-covered tip of Tenerife’s landmark is visible to the neighboring islands. Incidentally, the volcano got its name from the Guanches: the natives of Tenerife used the term “Echeide” to refer to the mountain, which was considered to be the place that harbors the forces of evil, mainly the evil figure of Guayota.

Nevertheless, Teide was a sacred mountain for the Guanches. According to legend, Guayota, the devil, kidnapped Magec, the god of light and sun, and imprisoned him inside the volcano, plunging the world into darkness. The Guanches asked their supreme god Achamán for clemency, so Achamán fought Guayota, freed Magec from the bowels of the mountain, and plugged the crater with Guayota. It is said that since then, Guayota has remained locked inside Teide. When going on to Teide during an eruption, it was customary for the Guanches to light bonfires to scare Guayota. Guayota is often represented as a black dog, accompanied by his host of demons, the so-called Tibicenas.

Enough of history and mythology, let’s finally get to the route that leads us to the top. For the trail of 9.5 kilometers marked as “difficult” from the Montaña Blanca car park to the summit of the Teide, we needed nearly 5 hours. The entire path offers stunning views over the national park and large parts of the island and the neighboring islands. For the most challenging of all official hiking trails in the Teide National Park, a good level of fitness is an important factor in addition to good equipment.

For the ascent of the summit a permit is required, which can be obtained online or in the office of the National Park Administration in Santa Cruz de Tenerife. Permission with a two-hour time window is granted free of charge if the conditions at the summit permit the ascent and the quota for the corresponding period has not yet been exhausted. No permit is needed for those staying at Refugio de Altavista at 3270 meters (registration required) and climbing the summit before nine o’clock.

Consequently, the ascent in the early morning hours is very popular, so that one arrives at the summit at sunrise, but in any case before 9 o’clock. That way you have the view on the one hand at night (the best starry sky ever), but also during the day. Most of the people go down with the first cable car between 8 and 9 o’clock. We hiked down the entire route back to the parking lot. However, we would not have thought before that we’d need almost as long as for the way up due to the high slope and danger of slipping.

We start as already mentioned at Montaña Blanca parking at about 2350 meters above sea level. So it’s almost 1400 vertical meters to reach the top of the summit. Here you first meet some signs before the path leads uphill along the lava flows. Before you reach the third highest volcano of Tenerife Montaña Blanca, you come across the Huevos del Teide, the “eggs of Teide”. The lava balls, up to five meters in diameter, were probably released from the liquid lava and formed into balls while rolling downhill.

At the parting of the ways at the foot of Mount Teide you follow the steep path to the mountain hut Refugio Altavista. A short distance further on you can switch from Sendero 7 to Sendero 11 for the viewpoint Mirador de La Fortaleza, which is only a mini detour of less than 100 meters away. From there, the path is roughly paved with lava rock and leads to the mountain station of the Teide cable car and the viewpoint Mirador de Rambleta. Here ends the Sendero 7 and turns into the Sendero 10, which leads on a narrow path steeply uphill to the summit of Pico del Teide.

For these last 600 meters or 170 vertical meters we needed about 20 to 30 minutes. And just for this last section you will actually need a permit, unless you are at the barrier before 9 AM. Once at the top, we could see the transition from night to day and the sunrise, before we started the descent. Besides, the there prevailing cold weather can be well endured at the openings near the crater, from which warm sulfur and other volcanic gas exhalations, also called fumaroles, escape. On beautiful days, you’ll get fantastic panoramic views over Tenerife and the neighboring islands.

Alternatively, you can also reach the impressive summit by cable car. The Teide cable car is open from 09:00 to 16:00, with the last trip up at 16:00 and the last trip down at 16:50. The prices are steep as well: non-resident adults pay 27 euro for the round trip, children half of that. The one-way ticket for adults costs 13.50 euro as well. On a side note, in the Teleférico del Teide base station, you can get a vegan-declared tofu baguette in the cafeteria, as well as plant milk for beverages.

By the way, the volcano Teide is considered active. From the interior of the mountain, sulphurous vapors rise at various points. An eruption in the near future, however, is not expected according to geologists. And even if: The volcano is monitored by sensitive remote-controlled sensors. You want to know more about Tenerife? Here you get to our first Tenerife article and our video of Tenerife. And here you will find more hiking routes in Tenerife: