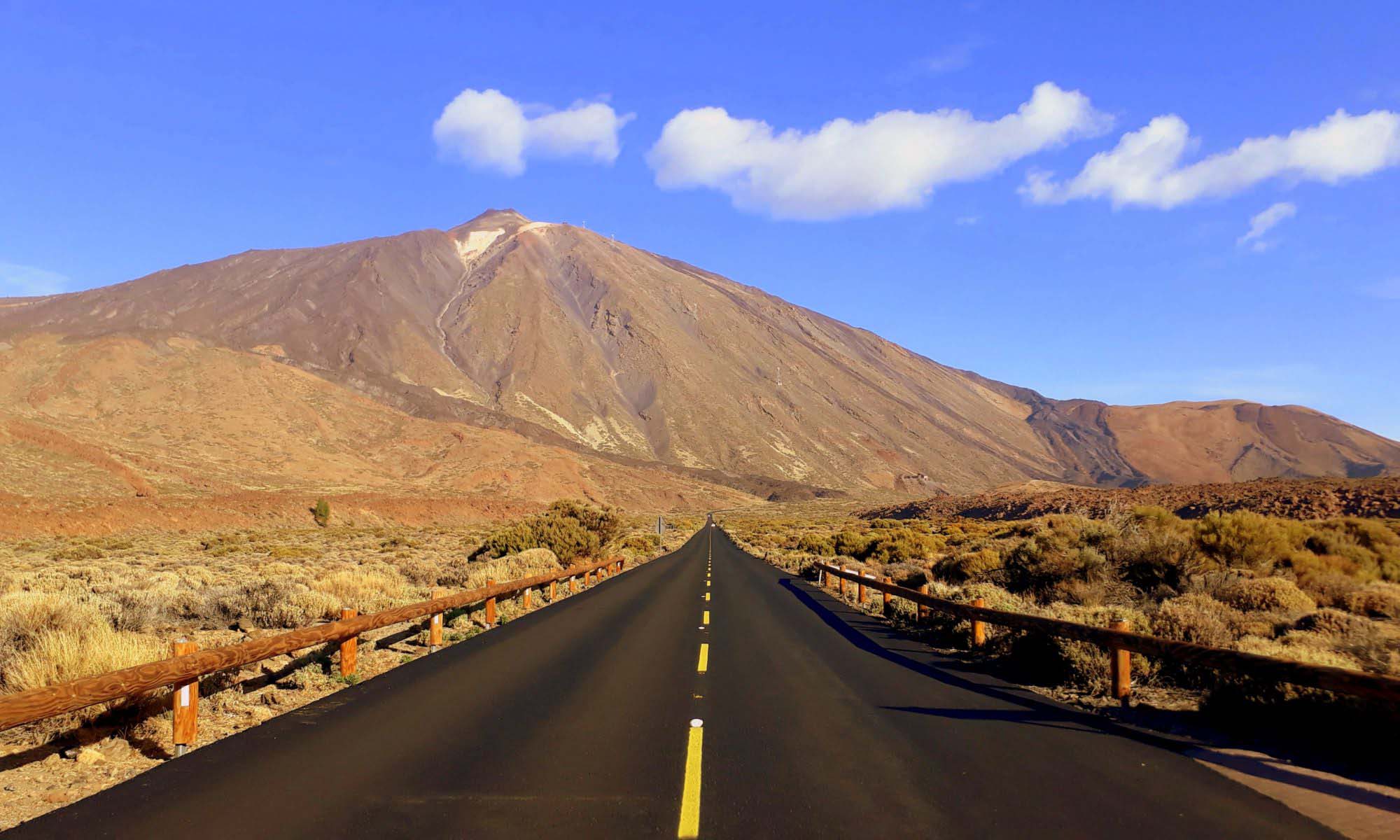 Third Stage: From the Masca Gorge via the Teide back to the Airport

For the penultimate full day of your trip, there is quite a lot on the program. Among are absolute highlights of Tenerife, such as the Masca Gorge.

It is named after the mountain village of Masca, which is located in a volcanic crater at an altitude of 650-800 meters above sea level in the Teno mountain range. If you want, you can do the perhaps most impressive hike on Tenerife here. The tour through the Masca Gorge begins in the lower center and leads through a narrow Barranco to the sea (about 6 hours round trip, so plan enough daylight!).

However, the trail also has a fairly high level of difficulty, so you should only enter it well equipped. Also very popular is the one-way hike followed by a boat trip to Los Gigantes. From there you can return to your car by bus or taxi.

But if you are as lazy as we are, simply drive the many serpentines from Buenavista del Norte up to Santiago del Teide. Even like this, you can enjoy enchanting views. If you are hungry, you can stop on the way at the vegetarian El Guanche, the oldest restaurant in Masca.

Update July 2018: The Masca Gorge was closed for an indefinite period of time by the authorities of the island of Tenerife at the end of February this year. The reason for this is the long-standing increase in serious accidents in the Barranco. The eventual trigger for the closing were seven German hikers who ignored all storm forecasts by the state meteorological service as well as the closure of all hiking trails for that day. Due to the storm, the wanderers had to spend the night in the Masca Gorge and could only be recovered the next morning. At present, all technical advice recommends that the closure of the gorge be maintained until a system has been established to secure the Barranco and the measures have been implemented.

In general, when hiking, please always pay attention to the weather and possible storm forecasts as well as to good equipment (at least hiking boots), sufficient water supplies and emergency provisions of food.

If you have not been already here because of the one-way hike anyway, head to Los Gigantes now. It is a touristy place known for its unique cliffs Acantilados de los Gigantes. The rocks fall at this point up to 450 meters vertically into the sea.

From here we go into the national park Parque Nacional del Teide. It is the largest and oldest reserve of this kind in the Canary Islands, established in 1954 and declared a UNESCO World Heritage Site in 2007. It is named – obviously – after the volcano Teide, which at 3718 meters is the highest mountain in the Spanish national territory. In addition, at 7500 meters above sea level, it is the third highest island volcano on earth.

Before we take a closer look at the stratovolcano, we first stop at the Roques de García. The rock formation is located about five kilometers south of the summit of the Teide at an altitude of about 2200 meters. The most famous of the bizarrely shaped volcanic rock towers is the Roque Cinchado, also known as the “Stone Tree” or “Finger of God”.

Let’s finally arrive at the foot of the Teide. For the ascent of the summit a permit is required, which can be obtained online or in the office of the National Park Administration in Santa Cruz de Tenerife. Permission with a two-hour time window is granted free of charge if the conditions at the summit permit the ascent and the quota for the corresponding period has not yet been exhausted.

No permit is needed for those staying at Refugio de Altavista at 3270 meters (registration required) and climbing the summit before nine o’clock. In addition, it is particularly impressive if you are already at the summit at sunrise.

By Cable Car to the Teide

Alternatively, you can also reach the impressive summit by cable car. The Teide cable car is open from 09:00 to 16:00, with the last trip up at 16:00 and the last trip down at 16:50. The prices are steep as well: non-resident adults pay 27 euro for the round trip, children half of that. The one-way ticket for adults costs 13.50 euro as well. In the Teleférico del Teide base station, you can get a vegan-declared tofu baguette in the cafeteria, as well as plant milk for beverages.

In our opinion, however, the Teide is already worth seeing from the crater rim of the Cañada del Teide, so that a hike or a ride on the cable car is not absolutely necessary. If you want, you can visit the Observatorio del Teide, which together with the Observatorio del Roque de los Muchachos on La Palma forms the European Northern Observatory (abbreviated to ENO).

The next accommodation we can highly recommend to you is called Casa Blanca Tenerife Sur and is located in Granadilla de Abona. It has only four double rooms with shared facilities. On the roof terrace you can prepare a delicious dinner in the outdoor kitchen and enjoy it with a magnificent view.

You can prepare your breakfast yourself in the kitchen of the accommodation. In the village there are several supermarkets, including a Mercadona. It’s best to pack some snacks as well. Because today let’s go hiking! Namely to the “lunar landscape” Paisaje Lunar.

For this, you drive by car to a gravel parking lot about 2 kilometers (as the crow flies) northeast of Vilaflor. From there, a circular trail of about 7 kilometers leads to the interesting rock formation at the edge of the Teide Caldera.

But don’t let yourself be fooled by the images on the internet, as it is not allowed to go that close to – let alone into – the moonscape. “Legally”, it can only be viewed from a relatively distant view point. In our opinion, the hike is still worthwhile because of the beautiful forest path.

We continue to Playa de las Américas, the tourist capital of Tenerife par excellence. In addition to numerous hotel complexes, clubs and beaches, there is also the Veronica’s Strip (Avenida Las Américas), which resembles the Strip in Las Vegas. Here are many restaurants, bars and cafes located.

And vegans do not have to go hungry either: The Burger Cafe has vegan options, including vegan burgers and various milkshakes that can also be prepared with coconut milk (highly recommended!). The VivoBar offers fruit shakes as well, optionally refined with soy or almond milk. In the neighboring villages of Costa Adeje and Los Cristianos there are two purely vegan restaurants: BuenaVida Vegan and K-Vegan.

Even for the evening we have an unconditional recommendation for you: the Pizzeria Focacceria Zeneize. It is not only completely vegetarian, but also offers vegan declared options and including homemade vegan cheese – yummy! If you don’t like pizza (do such people exist?), you will definitely find something from the pasta selection. Enjoy the meal. 😉

To stay overnight we recommend you – depending on your flight’s departure time – an accommodation either in Playa de las Américas, for example Vera Cruz, or already near the airport, for example in the already mentioned Los Amigos Hostel or Apartamentos Green Park. That way, you can calculate the journey time to the airport exactly.

If you have some time left before your departure, we recommend a short detour to Madre Tierra. At the vegetarian organic café & shop, you can get vegan schnitzel burger, tofu croquettes and other delicacies.

In addition, we have found online that there should be Camden Food Co directly in the airport Tenerife South near Gate 9, which is said to have, among other, vegetable-quinoa salad and various fruit cups on offer. If you know more or know if this information is still up to date, please let us know in the comments. Thank you! 🙂

Here you get to the cost of a Tenerife road trip.